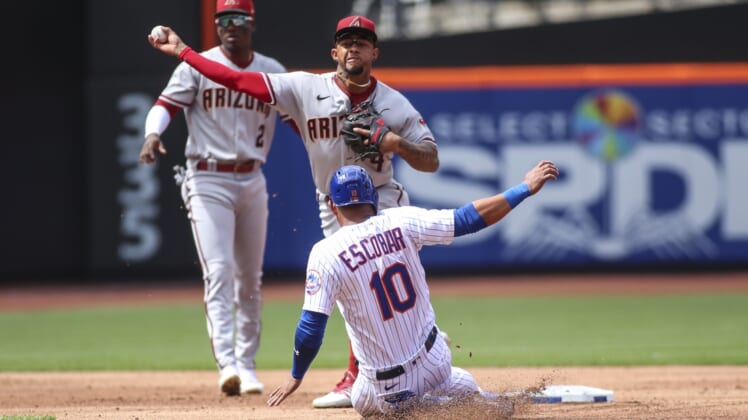 Eduardo Escobar’s hustle double sparked an unusual three-run sixth-inning outburst Sunday afternoon by the New York Mets, who went on to beat the visiting Arizona Diamondbacks 5-0 in the finale of a three-game series.

J.D. Davis and James McCann collected RBIs later in the sixth and Pete Alonso remained red-hot as a designated hitter by hitting a two-run homer in the seventh for the Mets, who have opened the season with seven wins in 10 games.

Five pitchers combined on the five-hitter for the Mets, with Chasen Shreve (1-0) earning the win by tossing two perfect innings.

The teams were locked in a scoreless duel until Francisco Lindor led off the sixth with an infield single against Noe Ramirez (0-1). Alonso followed with a pop-up to shortstop, where Geraldo Perdomo let it drop in order to force Lindor.

Escobar then delivered a hit just over the head of first baseman Christian Walker. With Alonso racing from first to third, Escobar never broke stride and headed for second, where Pavin Smith’s throw sailed over the head of Perdomo. Alonso trotted home with the first run and Escobar ended up at third.

The Diamondbacks, uncertain if Dominic Smith waited until the ball was caught to tag up, tried appealing as Luis Guillorme stepped into the batter’s box, but Davis took off for second. After beginning his motion towards third, Perez ran towards second but didn’t throw the ball as Davis recorded the stolen base. Perez then threw to third, but the appeal was denied.

Alonso’s round-tripper gave him three homers and 11 RBIs in three starts at designated hitter this year.

Escobar was the lone player on either team with two hits.