Mets score 5 in 9th to rally past Cardinals 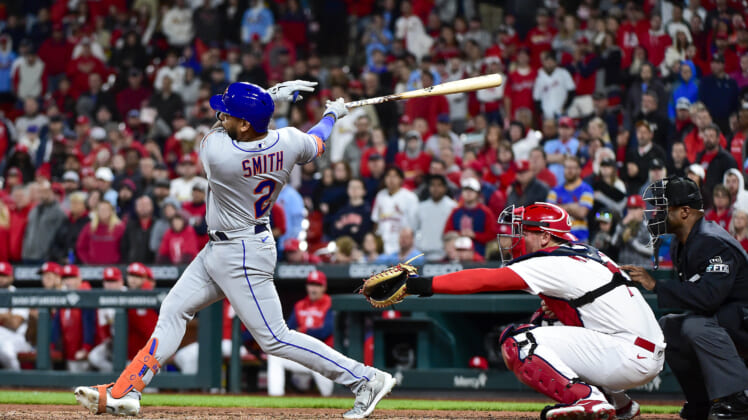 The Mets trailed the Cardinals 2-0 in the ninth, but stormed back with a five-run outburst triggered by Smith and capped by Brandon Nimmo’s two-run homer.

Mets starter Max Scherzer threw seven shutout innings. He allowed two hits and a walk and struck out 10 while remaining unbeaten in his last 23 starts.

This was the 106th time Scherzer struck out 10 or more batters, which ranks fifth all time.

Trevor May (1-0) relieved Scherzer and earned the victory despite allowing two runs. Edwin Diaz closed out the Cardinals to earn his second save.

Cardinals starter Miles Mikolas matched Scherzer with seven scoreless innings. He held the Mets to four hits and a walk while striking out five.

Mikolas has allowed just one run in 18 2/3 innings in his last three starts.

Genesis Cabrera retired the Mets in order in the eighth inning, but the Mets rallied against Giovanny Gallegos (0-1) and T.J. McFarland in the ninth.

Scherzer and Mikolas worked out of periodic trouble through the first seven innings.

Eduardo Escobar hit a one-out single in the second inning and Mikolas hit Mark Canha with a pitch with two outs. But Jeff McNeil struck out to strand them.

In the third inning when Tommy Edman drew a two-out walk and Paul Goldschmidt hit a single, O’Neill struck out to end the threat.

The Mets left a runner on second base in the fourth when Robinson Cano hit an inning-ending popout.

McNeil hit a one-out double in the fifth inning, but Tomas Nido struck out and Nimmo flied out.

Yadier Molina greeted May with a leadoff single in the eighth. Harrison Bader followed with a single and Edman advanced the runners with a chopper.

Goldschmidt walked to load the bases and O’Neill lined a two-run single hit to put the Cardinals up 2-0.

In the ninth, Escobar hit a one-out single and scored on Canha’s infield single and Nolan Arenado’s throwing error.