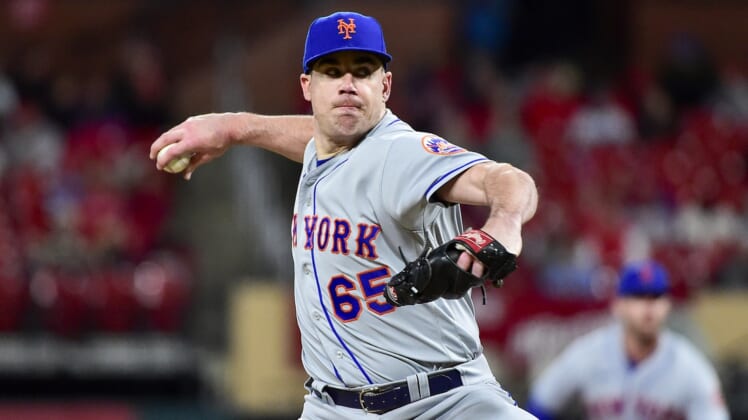 The New York Mets placed right-hander Trevor May on the 10-day injured list Tuesday after an MRI exam detected a triceps strain in his pitching arm.

May aggravated the injury during a relief appearance on Monday in which he gave up two runs in one inning against the Atlanta Braves.

It marked the third time in four appearances that May gave up two runs, and he expressed frustration after the contest.

“It’s hard to compete when you’re just worried about whether or not something’s going to hurt to throw,” May said. “It’s to the point where I’m not very comfortable throwing my best pitches and taking too much time between pitches to reset and try to get a little bit of energy to throw another one.

“By the end of (Monday’s outing), I was just hoping that the ball was hit at somebody. That’s no way to throw in a major league game. I don’t deserve it, but my teammates definitely don’t deserve that.”

May went 7-3 with a 3.59 ERA in 68 relief appearances last season in his first campaign with the Mets.

New York recalled right-hander Adonis Medina from Triple-A Syracuse to fill the roster opening. Medina, 25, had a 3.00 ERA in three appearances (one start) at Syracuse and also tossed a scoreless inning of relief against the Arizona Diamondbacks on April 23.