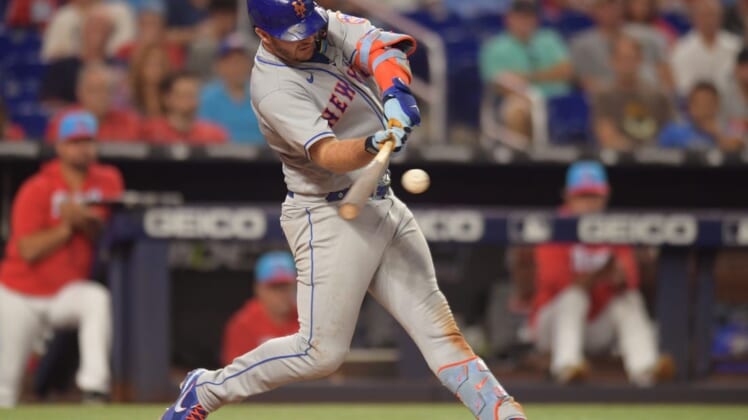 New York Mets first baseman Pete Alonso confirmed Monday that he will compete for his third consecutive title in the Home Run Derby next week at Dodger Stadium in Los Angeles.

“It’s going to be super exciting, so I’m really looking forward to it,” Alonso said before the Mets’ game against the Braves Monday night in Atlanta.

Alonso, who came into Monday night’s game with 23 home runs this season, hit a total of 74 last year in Denver in joining Ken Griffey Jr. (1998-99) and Yoenis Cespedes (2013-14) as the only players to win back-to-back titles in the Derby.

Alonso won his first Home Run Derby in 2019 in Cleveland; the 2020 event was canceled due to the COVID-19 pandemic.

“I think I’m the best power hitter on the planet,” Alonso said last year after his Derby victory. “Being able to showcase that, and really putting on a fun display for fans, I just think it’s a dream come true for me because when I was young, my parents let me stay up past my bedtime to watch this. That was one of the few nights per year I actually got to stay up past my bedtime, just watch incredible feats that you don’t see in a regular baseball game.”

The field to challenge Alonso in the July 18 event is taking shape. The Braves’ Ronald Acuna Jr. announced Monday that he will compete, and The Athletic reported that St. Louis Cardinals slugger Albert Pujols will participate.