Mets move on from ‘bump in the road,’ host 2-game set vs. Astros 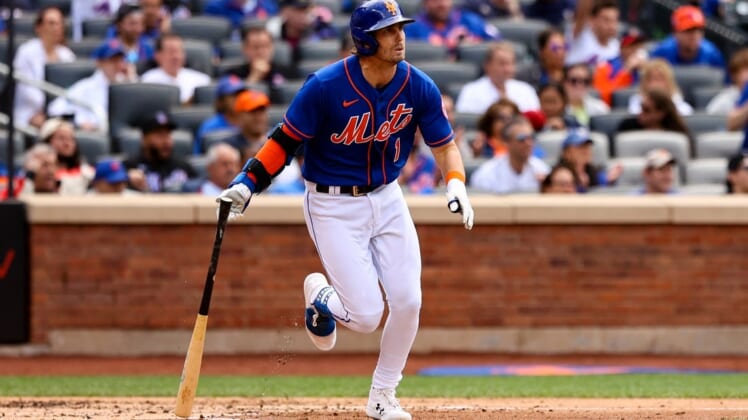 Max Scherzer’s return is still a few days away, but the New York Mets could have Jeff McNeil back in the lineup when they begin a brief two-game set against the visiting Houston Astros on Tuesday.

McNeil is expected back after missing the past five games due to right hamstring tightness, while Scherzer (oblique strain) will make his second rehab start for Double-A Binghamton on Tuesday. He could rejoin New York’s rotation this weekend.

New York returns home following a 2-3 road trip against Houston and the Miami Marlins. The Mets went 1-for-13 with runners in scoring position in Sunday’s 3-2 loss to the Marlins, who won on Nick Fortes’ ninth-inning homer against Adam Ottavino.

The right-handed reliever had allowed one earned run in his last 19 appearances over 18 innings before giving up Fortes’ solo blast.

“I don’t want to lose the game for the team, but personally … it’s a blip, a bump in the road,” Ottavino said. “I’m not going to lose sleep over it individually, it just sucks to lose for the team.”

The Mets will look to bounce back against an Astros team that split a four-game series against the New York Yankees over the weekend.

The entertaining series included Houston’s 3-0 win on Saturday, when Cristian Javier, Hector Neris and Ryan Pressly combined on the first no-hitter against the New York Yankees in 19 years.

Aaron Judge answered on Sunday with a three-run homer in the 10th inning to give the Yankees a 6-3 walk-off victory.

“It was a lot of intensity and energy for both sides,” said Astros second baseman Jose Altuve, who hit two home runs during the series. “We played good, 100 percent every single inning. We did everything we could and I’m happy with the way we played.”

The Astros will turn to left-hander Framber Valdez (7-3, 2.90 ERA) for the series opener. He received a no-decision after allowing three runs on two hits over six innings against the Yankees last Thursday.

Valdez, 28, has posted a 4.21 ERA in six home starts this season compared to a 1.95 mark in eight outings away from Minute Maid Park.

Starling Marte is 1-for-8 with three strikeouts against Valdez, who is making his first appearance versus the Mets.

New York starter Carlos Carrasco (8-3, 4.42) is set to face the Astros for the second time in the past week after exiting early in last Wednesday’s contest.

The right-hander allowed a season-high three homers before departing with lower back tightness in the third inning.

Carrasco, who yielded four hits and five runs in 2 1/3 innings last Wednesday, has gone 4-4 with a 4.34 ERA in 10 career games (nine starts) against Houston.

Altuve (10-for-27, one home run) and Yuli Gurriel (5-for-13, two doubles) have fared well against Carrasco, who has posted a 5.33 ERA in five starts this month across 25 1/3 innings. Yordan Alvarez has homered in both career at-bats against Carrasco.

Mets manager Buck Showalter is exercising patience with third baseman Eduardo Escobar, who is batting .225 for the season after going 5-for-44 (.114) over the last two weeks.

“It seems like every borderline pitch to him is a strike,” Showalter said. “He is playing the heck out of third base for us. He is a force on the field and off, but we are not even halfway there. It bodes well for the rest of the season if at some point he can get it going.”