Jacob deGrom threw six scoreless, one-hit innings Friday night for the New York Mets, drove in two runs and picked up the win, but he departed with right flexor tendinitis in his pitching elbow.

Now the right-hander and the Mets must wait to see if it’s anything serious.

deGrom, in his interview after the Mets’ 3-2 win over the visiting San Diego Padres, sounded as if he doesn’t think it’s a major problem.

“I felt it this week in between (starts),” he said. “I’m not too concerned about it because it didn’t get much worse as the game went on. But in the sixth inning, when I was trying to warm up, I could feel it and it was tightening up a little bit.

“But I’ve had a couple elbow issues before and I know what that feels like, so my level of concern is not too high. I’m pretty optimistic about it and I’m pretty sure it’s going to be something that we can treat and hopefully not miss any time.” 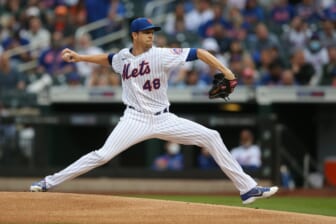 deGrom’s previous right elbow issues include missing the 2011 season as a minor-league while recovering from Tommy John surgery, which he had after making just six professional starts. He also missed 15 days in 2018 with a hyperextended right elbow.

On Friday, deGrom was serenaded with “M-V-P” chants from a Citi Field crowd of 26,637 — the team’s largest since the pandemic began — as he continued his historic start to the season by striking out 10, walking none and lowering his ERA to 0.56. The ERA is the lowest ever for a pitcher through his first 10 starts of a season.

The seventh strikeout Friday gave deGrom 100 for the season in just 61 2/3 innings, the fastest any pitcher has ever reached 100 strikeouts in a year.

The Mets announced the reason for deGrom’s exit in the top of the eighth. The two-time National League Cy Young Award winner had a start pushed back in May due to right side tightness before he spent 15 days on the injured list for the ailment later in the month.