Mets have shot at history against Nationals rookie 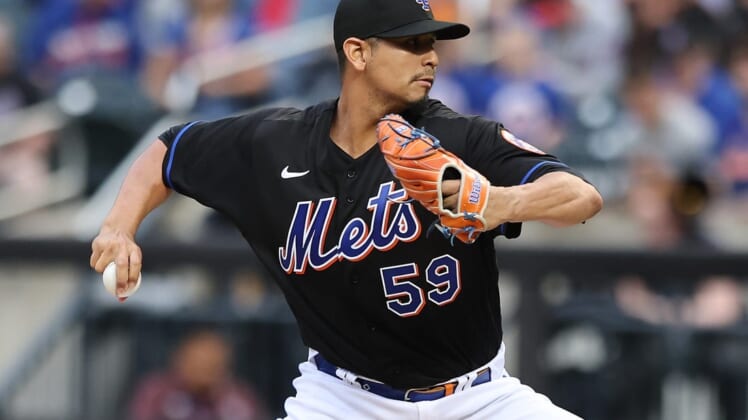 After nearly five decades in professional baseball, New York Mets manager Buck Showalter understands the question everyone has about his team — is the red-hot start sustainable? — will be answered over the next several months.

However, Showalter won’t have to wait long to find out whether the Mets can do something the franchise has never done: score at least 10 runs in three straight games.

The Mets will look to complete a series sweep, and perhaps make some history, when they conclude a three-game set Wednesday afternoon against the visiting Washington Nationals.

Right-hander Carlos Carrasco (5-1, 3.98 ERA) is slated to start for the Mets against left-hander Evan Lee, who will be recalled from Double-A Harrisburg to make his major league debut.

The Mets extended their winning streak to five games Tuesday night, when Starling Marte and Eduardo Escobar hit two-run homers in a 10-0 rout of the Nationals.

New York, which won the Monday opener 13-5, has scored at least 10 runs in consecutive games twice in the last nine days. The Mets beat the Giants 11-3 on May 23 before falling 13-12 to San Francisco the next day.

The back-to-back wins over the Nationals symbolized the methodical offensive approach utilized by the Mets, who collected 33 hits — including 26 singles — in the two contests. New York has the most hits (465) and second-most runs (266) in baseball despite hitting only 47 homers, tied for the 12th fewest in the majors.

“Our curiosity is always satisfied. The game always answers your questions,” Showalter said. “But I hope they keep (their) approaches (the same) — putting the ball (in play), making people defend you and having Lady Luck shine on you sometimes by putting the ball in play.”

The task of quieting New York on Wednesday falls to Lee, who has never pitched above Double-A. A 15th-round draft pick of the Nationals in 2018, Lee was 0-3 with a 3.60 ERA in seven starts for Harrisburg. He last pitched for the Senators on Friday, when he took the loss after giving up five runs (four earned) in four innings against Akron.

Lee, 24, is set to become the seventh starting pitcher used this year by the Nationals. He will try to provide some length after World Series-winning veterans Erick Fedde and Patrick Corbin gave up a combined 13 runs while lasting just 5 2/3 innings in their starts Monday and Tuesday.

“We’ve got to do a better job of understanding what we need to do to get these hitters out,” Nationals manager Davey Martinez said. “That’s something we’ll talk about (Wednesday).”

Carrasco earned a win on Friday despite giving up five runs and six hits over 5 2/3 innings as the Mets beat the Philadelphia Phillies 8-6. He struck out seven and walked one. The 35-year-old veteran is 1-1 with a 4.87 ERA in five career games (four starts) against the Nationals.