Mets get just enough runs, and a big catch, to edge Dodgers 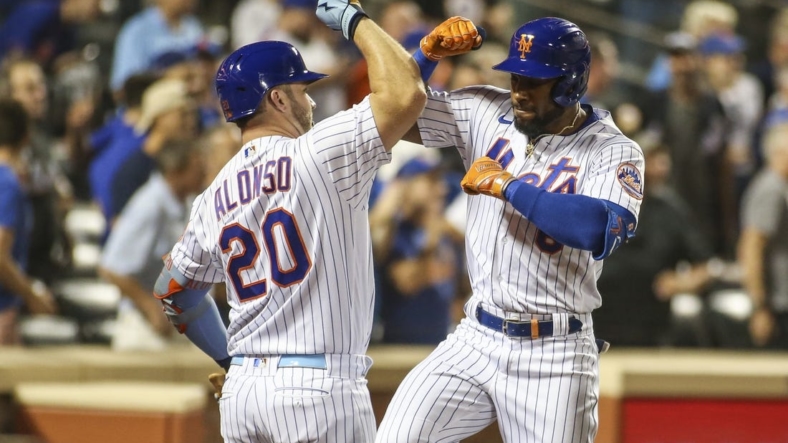 Starling Marte’s two-run homer in the third off Tyler Anderson (13-3) provided all of the offense for the Mets, who have split the first two games of the three-game series with their fellow National League division leaders.

The loss was just the sixth in 28 games this month for the Dodgers.

deGrom (4-1) carried a no-hitter into the fifth inning, when Justin Turner singled. He allowed one run on three hits — including a solo homer by Mookie Betts in the sixth inning — and walked one while striking out nine.

Turner nearly tied the game in the seventh, when he hit a long fly to center. Nimmo ranged back, leaped before the wall and caught the ball as it was going over the orange home run line.

Nimmo yelled, fired the ball back to the infield and pumped his fist. The normally stoic deGrom raised his arms and then doffed his cap to Nimmo.

After striking out Gavin Lux to end the inning, deGrom — who normally exits down the right staircase of the Mets dugout — walked to the left to be among those greeting Nimmo.

Adam Ottavino threw a perfect eighth inning to set the stage for Edwin Diaz, who trotted in for the save opportunity while Timmy Trumpet played the opening stanza of Diaz’s entrance song, “Narco,” in front of the Dodgers’ dugout. Diaz then threw a 1-2-3 ninth with one strikeout to earn his 29th save.

Nimmo also helped spark the Mets’ rally against Anderson in the third, when he singled with two outs Marte followed with his 16th homer, a shot beyond the right-center field fence.

Nimmo and Francisco Lindor had two hits each.

Anderson allowed two runs on eight hits and no walks while striking out three over seven innings.