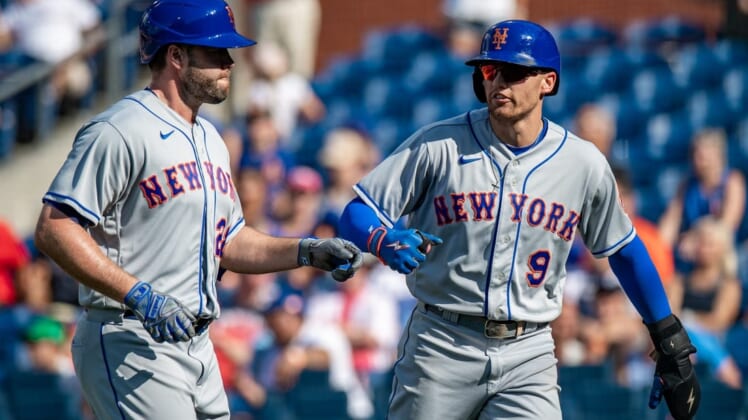 Mark Canha hit two home runs, including the go-ahead two-run shot in the ninth inning off David Robertson, to rally the New York Mets past the host Philadelphia Phillies 10-9 on Sunday.

Canha had three hits and drove in five runs for the Mets, who won three of four in the series. It was Canha’s third career multi-homer game. Brandon Nimmo added a solo homer in the ninth.

Trevor May (2-0) earned the win in relief. Edwin Diaz allowed one run in the ninth but still earned his 28th save in 31 chances.

Jean Segura had put the Phillies ahead 8-7 in the bottom of the eighth with a pinch-hit solo home run. After McNeil led off the ninth with a double, Canha smacked his 10th homer of the season to put the Mets up 9-8 before Nimmo’s shot made it 10-8.

Nick Maton cut it to 10-9 with a sacrifice fly to center, but with two runners on, Diaz struck out pinch-hitter Darick Hall to end the game.

The Phillies went ahead 4-0 in the first inning when Bohm crushed a three-run home run to left field and Maton added an RBI single.

The Mets quickly closed within 4-2 in the second when Michael Perez ripped an RBI single to center. Brett Baty also scored on a fielding error by Bradley Zimmer.

In the third, New York cut the deficit to 4-3 on a two-out RBI double by Vogelbach. One inning later, Marte tied the game with an RBI single.

Bohm hit his second three-run homer, this time to right, for a 7-4 Phillies advantage in the fourth.

After a 46-minute rain delay in the bottom of the sixth, Canha produced a three-run homer off Connor Brogdon in the seventh to tie the game at 7.