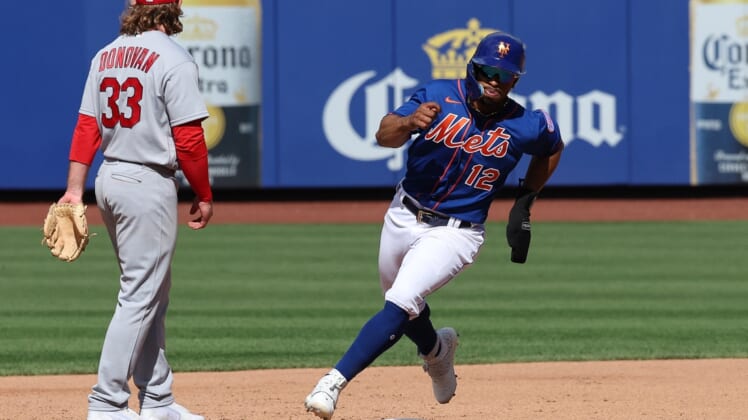 Five pitchers held the visiting St. Louis Cardinals to just six hits and one run Tuesday afternoon as the New York Mets won 3-1 in the opener of a doubleheader.

Jeff McNeil and Dominic Smith had RBI doubles in the third inning for the Mets, who have alternated wins with losses in their last seven games. The Cardinals lost for the sixth time in nine games.

Jake Reed (1-0), making his season debut, earned his first big league victory by walking two and striking out over two hitless innings of relief. Reed was the first pitcher to follow starter Trevor Williams, who allowed four hits and struck out six over four scoreless innings as a fill-in starter for Tylor Megill, who was placed on the injured list Sunday with right biceps tendinitis.

Seth Lugo threw a scoreless seventh and Drew Smith gave up a homer to Paul Goldschmidt in the eighth. Edwin Diaz earned his ninth save in the ninth, when he allowed a single and a walk but struck out three batters, including Harrison Bader on a slider outside of the strike zone to end it.

The Mets did all their damage against Miles Mikolas (3-2) in the second and third innings. New York loaded the bases with none out in the second, when Eduardo Escobar drew a walk in between singles by Dominic Smith and Luis Guillorme. Smith scored when Travis Jankowski’s grounder forced Guillorme at second.

The Mets scored twice more in the third, when Francisco Lindor led off by reaching on an error by shortstop Brendan Donovan. Lindor raced home when McNeil doubled down the first base line on the next pitch. One out later, Dominic Smith doubled home McNeil on an 0-2 pitch.

McNeil and Escobar had two hits apiece. Escobar entered Tuesday mired in a 2-for-31 slump over his previous eight games.

Brandon Nimmo went 0-for-4 for the Mets as a pair of streaks — an 11-game hitting streak and 26-game on-base streak — ended.

Carlson had two hits for the Cardinals.

Mikolas allowed the three runs (two earned) on seven hits and one walk while striking out five in six innings. His ERA rose from 1.49 — second-best in the National League entering Tuesday — to 1.68.