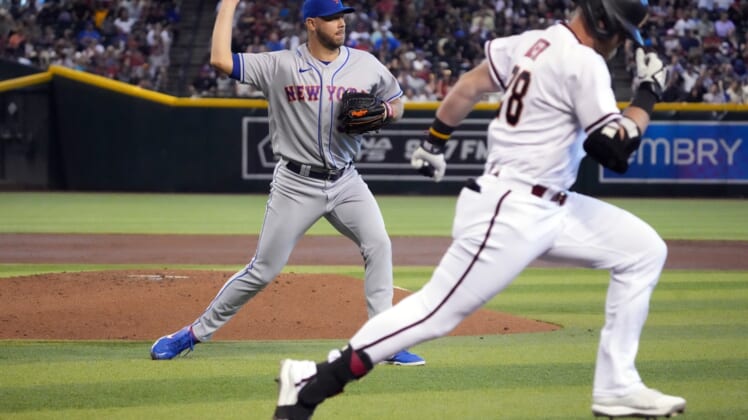 Tylor Megill continued his strong start to the season Sunday afternoon, earning the win by allowing two runs over 6 2/3 innings, as the New York Mets earned another series win by beating the host Arizona Diamondbacks 6-2 in the finale of a three-game set.

Starling Marte built the go-ahead run in the sixth for the Mets, who have won their first five series — tying the franchise record for most consecutive series wins to start a season, set in 2018.

The Diamondbacks are still seeking their first series win, though they have earned two splits.

Megill (3-0) gave up five hits and one walk while striking out seven. He retired the first eight batters he faced and came within one out of matching his career-long outing, set against the New York Yankees last Sept. 10.

Seth Lugo got four outs and Joely Rodriguez struck out two in a perfect ninth inning.

Mark Canha scored the Mets’ first run when he led off the game with an infield single, went to second on Sergio Alcantara’s throwing error and scored on Francisco Lindor’s one-out single. Christian Walker tied the game by homering off Megill in the fourth.

Marte put the Mets ahead when he doubled with one out in the sixth off J.B. Wendelken (0-1), stole third and scored when catcher Jose Herrera’s throw sailed into left field. The stolen base was the 300th of Marte’s career.

New York extended the lead to 4-1 in the seventh with the benefit of just one base hit — a one-out single by Luis Guillorme — when Travis Jankowski drew a bases-loaded walk and Marte was plunked by a pitch with the bases still loaded.

Nick Ahmed chased Megill with an RBI single before the Mets added a pair of two-out insurance runs in the eighth, when J.D. Davis homered and Guillorme doubled and scored after Alcantara misplayed James McCann’s grounder.

Diamondbacks starter Madison Bumgarner allowed an unearned run on four hits and no walks while striking out four over five innings.