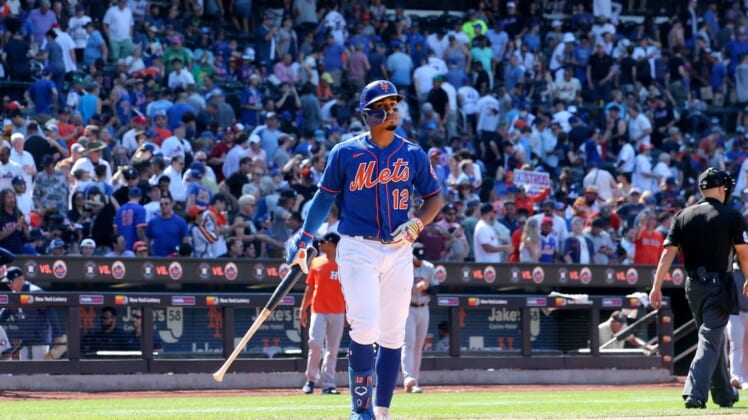 The New York Mets look to wake up their sleepy bats on Friday in the opener of a three-game interleague series against the visiting Texas Rangers.

The Mets have been outscored by a 14-3 margin and are 2-for-25 with runners in scoring position during their season-high three-game losing skid. They mustered just two hits during a 2-0 setback to the Houston Astros on Wednesday afternoon.

“It’s hard to win a Major League Baseball game,” Mets manager Buck Showalter said. “We’re playing the best baseball players and pitchers in the world and on any given night, they can be on top of their game and make it real tough on you.

“To be not too far from the halfway point (to lose three straight games) is pretty good.”

Showalter didn’t stop there when addressing how the team needs to alter its recent fortunes.

“The same way (we) have with the same things that have happened behind the scenes,” Showalter said. “They’ve responded. … We’ll be OK.”

While his teammates have struggled, Brandon Nimmo continued his steady hitting on Wednesday with a double off Justin Verlander to lead off the first inning. He is 13-for-33 with one homer, three RBIs and five runs during his eight-game hitting streak.

Bassitt, 33, recorded his second win in three outings after overcoming two homers and three runs total in seven innings of a 5-3 victory at the Miami Marlins on Saturday.

Bassitt owns a 5-2 record with a 3.07 ERA in 13 career appearances (nine starts) versus Texas. He has flustered Adolis Garcia (0-for-11, four strikeouts) and Nathaniel Lowe (0-for-9, four strikeouts).

Garcia, Lowe and Marcus Semien have been enjoying success at the plate this month, batting .314, .307 and .287, respectively. All three have belted seven homers in June.

The Rangers won five of seven before dropping a 2-1 decision to the Kansas City Royals on Wednesday afternoon. Despite the loss, Texas manager Chris Woodward sees his team taking strides in the right direction.

“I feel like we’ve definitely improved,” Woodward said. “It’s more individual, but I think as a group, there’s a lot more understanding to the buy-in of what we’re trying to accomplish every day. There’s really good dialogue in the clubhouse and in the dugout during the game. I think, as a group, we’re getting better. We’re definitely improving. Some guys are hot, some guys are a little bit cool right now. But as a group, I feel like there’s a lot of good buy-in, but we’ve just got to keep pushing.”

Leody Taveras belted his first homer of the season to highlight his second two-hit performance in his last three games.

Otto, 26, struggled mightily in his first start since being activated from the COVID-19 list. He permitted six runs on as many hits and walked three batters in two innings of a 6-4 setback versus the Washington Nationals on Sunday.

Otto will be making his 16th career start and first versus the Mets.