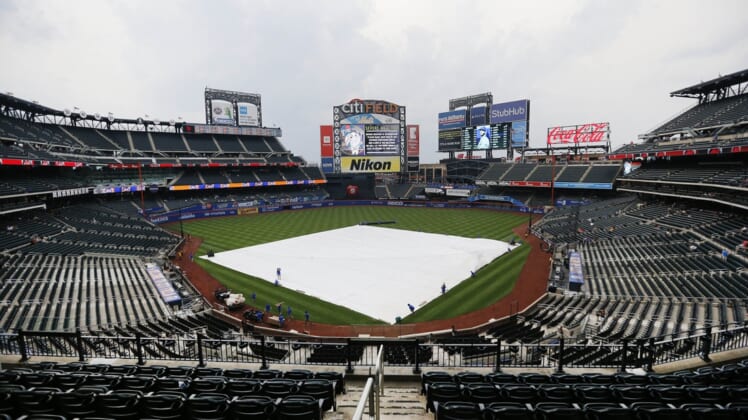 Jul 6, 2021; New York City, New York, USA; A general view with the tarp on the field prior to the game between the Milwaukee Brewers and the New York Mets at Citi Field. Mandatory Credit: Andy Marlin-USA TODAY Sports

New York Mets fans waited out a rain delay of nearly three hours before the club’s scheduled Tuesday night game against the visiting Milwaukee Brewers was postponed due to rain.

The contest will be made up as part of a day-night doubleheader of seven-inning games on Wednesday with start times of 2:10 p.m. ET and 7:10 p.m. ET.

Mets owner Steven Cohen tweeted more than 90 minutes after the scheduled first pitch, “Hang in there everybody, we are going to play tonight,” but play never got underway.

He later tweeted, “Well, game is canceled. We tried but the weather didn’t cooperate. My sincere apologies … I can control some things but that isn’t one of them.”

The game was to air nationally on ESPN, with New York ace Jacob deGrom scheduled to start against Milwaukee left-hander Brett Anderson.

The Mets will play their ninth doubleheader of the season and second in four days. New York split a day-night doubleheader Sunday at Yankee Stadium against the struggling New York Yankees.

Milwaukee will play its second doubleheader of the season, having swept a pair at Washington on May 29.

The Brewers enter the doubleheader with 11 wins in their past 13 games. They won 11 straight before dropping a 2-0 decision Sunday in Pittsburgh and a 4-2 decision Monday against the Mets.