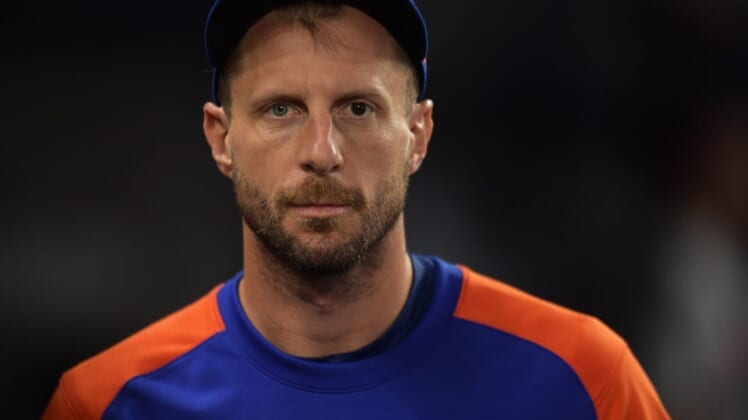 The future meets the present when a pair of starting pitchers return from injury Tuesday night as the visiting New York Mets meet the Cincinnati Reds in the middle game of their three-game series.

Cincinnati rookie left-hander Nick Lodolo (1-2, 5.52 ERA) is expected to come off the 60-day injured list to make his fourth career start — all this season — and his first since April 24. Lodolo landed on the IL on April 28, assigned first to the 10-day IL with a lower right back strain before being transferred to the 60-day IL on June 21.

Lodolo has been touted as one-third of Cincinnati’s talented rookie pitcher crop, along with Hunter Greene and Graham Ashcraft.

The Mets will counter with ace Max Scherzer (5-1, 2.54). Scherzer left the game against St. Louis on May 18 with a right oblique strain in the sixth inning and was placed on the injured list the following day.

Scherzer has dominated the Reds in Cincinnati over his career, posting a 4-0 record with a 0.33 ERA. In addition to winning all four previous starts at Great American Ball Park, Scherzer has allowed just one run in 27 innings. His 0.33 ERA at the venue is the lowest among all pitchers with at least 25 innings.

Overall, Scherzer is 6-2 with a 1.84 ERA in nine starts against the Reds. His 1.84 ERA is tied for the ninth-lowest mark among all pitchers with at least 50 innings against Cincinnati since the earned run became official in 1913.

After snapping their 10-game home losing streak on Sunday, the Reds lost again Monday in the opener to the Mets, dropping Cincinnati to 1-3 on its current 11-game homestand.

“Baseball is a crazy game,” said Reds third baseman Brandon Drury, who hit a game-tying three-run homer Monday. “That’s why you just got to keep going until the end because you never know what’s going to happen.”

“We’re very aware that we haven’t been winning as many games as we want to win, there is no question about that,” Reds manager David Bell said. “(I am) really happy with the resiliency.”

The second game of the series will continue the family reunion of Mets closer Edwin Diaz and his younger brother, Reds reliever Alexis Diaz, who is currently on the injured list and not available to pitch in the series.

Edwin is having his most overpowering season, racking up 17.54 strikeouts per nine innings while going 18-for-21 in save opportunities and posting a 1.95 ERA. He was given Monday off as reliever Seth Lugo recorded the final three outs for his third save in six chances.

“I’m really proud, because he’s worked really hard,” Edwin Diaz said of Alexis. “He had some injuries when he was in the minor leagues, but he made it, and he’s doing really, really good right now. I’m really happy for him.”

Alexis Diaz, who is three years younger, is battling more injury in his career, landing on the injured list with a strained right biceps. Alexis underwent Tommy John surgery in 2016 and pitched at Double-A Chattanooga last season.

This year, Alexis is 2-0 with a 2.40 ERA, including two saves in three chances for Cincinnati and on June 12, Alexis and Edwin Diaz became the third set of siblings to record saves on the same day.