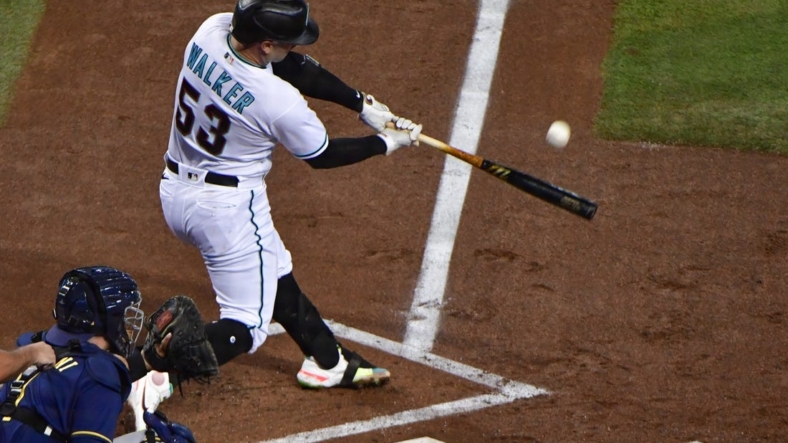 Merrill Kelly pitched seven shutout innings and Christian Walker drilled a two-run homer to lead the Arizona Diamondbacks to a 5-0 victory over the Milwaukee Brewers on Thursday night at Phoenix.

Josh Rojas added a two-run double, joining Walker and Geraldo Perdomo with two hits apiece for Arizona. The Diamondbacks won for the seventh time in the past nine games.

Jace Peterson had two hits for the Brewers, who stand three games behind the San Diego Padres for the National League’s third and final wild-card spot.

Milwaukee’s Brandon Woodruff (9-4) gave up five runs and eight hits over 5 2/3 innings as his 11-start unbeaten stretch came to an end. All of the runs off Woodruff came with two outs.

Brewers left fielder Christian Yelich departed after 3 1/2 innings due to neck discomfort. Yelich was 0-for-2 with one strikeout before exiting.

Thursday’s game was the first of seven between the teams over the final five weeks of the season.

Kelly continued his strong pitching by not allowing more than one hit in any inning. He retired the final eight batters he faced.

Caleb Smith struck out four while pitching two perfect innings of relief to end it and make it 14 straight Brewers to go down.

Arizona struck in the bottom of the first when Ketel Marte hit a two-out double and Walker followed with a 406-foot blast to left off Woodruff. The homer was Walker’s 31st of the season.

The Diamondbacks tacked on another run in the second when Alek Thomas doubled with two out and Perdomo followed with an RBI single.

Arizona had two runners on with two out in the sixth when Rojas hit a thunderous blast that nearly cleared the 25-foot wall in center. Carson Kelly and Perdomo scored on the double that ended Woodruff’s night.