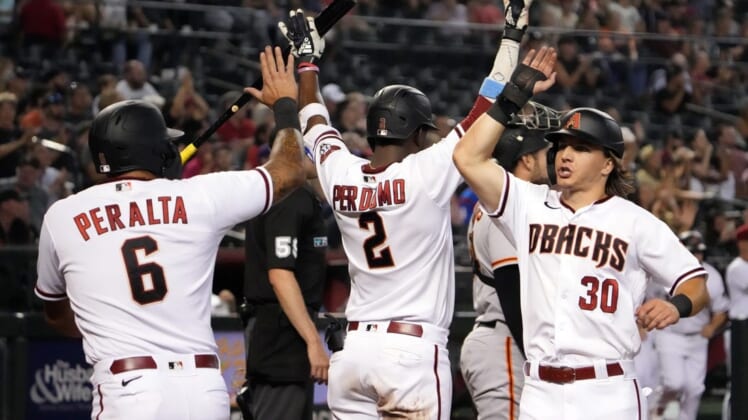 Josh Rojas had two hits and three stolen bases and Jake McCarthy added two hits and two runs to help Arizona win for the fourth time in the past five games. Carson Kelly and David Peralta also had two hits apiece for the Diamondbacks, who had 11 overall.

San Francisco dropped its fifth straight game since play resumed following the All-Star break. The Giants have lost 21 of their past 32 contests to fall to .500.

Merrill Kelly (10-5) allowed just three hits, walked none and struck out seven in a 99-pitch effort. He retired the first 15 batters he faced until Luis Gonzalez led off the sixth with a double just inside the first base line.

The other two hits off Merrill Kelly were bunt singles as Joc Pedersen dropped one down to start the seventh and Gonzalez reached with two outs in the eighth. Merrill Kelly then picked Gonzalez off first.

Arizona’s Keynan Middleton plunked David Villar with a pitch to open the ninth, then induced a double-play grounder before apparently injuring his right ankle during a pitch to Pederson. Noe Ramirez replaced Middleton and struck out Pederson to end it.

Jarlin Garcia replaced Giants starter Jakob Junis (4-2) with a runner on second and one out in the fifth, then immediately gave up a run-scoring double to Geraldo Perdomo. Alek Thomas singled home Perdomo later in the inning for a 2-0 lead.

In the sixth, Peralta drew a leadoff walk from Sam Long and moved to third on McCarthy’s one-out double. Carson Kelly hammered his two-run double to deep center to make it 4-0 and scored later in the inning on Rojas’ single.

Christian Walker delivered a two-run single in the eighth off Gregory Santos.

Junis gave up one run and three hits over 4 1/3 innings in his second appearance and first start since June 10. He struck out two and walked one.