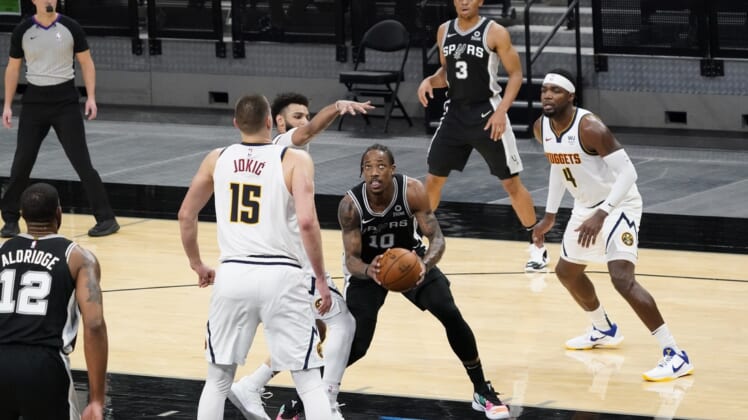 Two of the NBA’s hottest teams, the San Antonio Spurs and the Memphis Grizzlies, will look to continue their success when they square off on Saturday for the first of two games in three days in the Alamo City.

Memphis returns to the floor for the first time since Jan. 18 after having five games postponed over the past two weeks because of limited player availability due to COVID-19 protocols.

The Spurs will play the third game of a five-game homestand after handling the red-hot Denver Nuggets 119-109 on Friday behind 30 points and 10 assists from DeMar DeRozan.

Even now, the Grizzlies will not be at full strength, with Jonas Valanciunas and Grayson Allen listed as unavailable for Saturday’s contest because of the health and safety protocols. Valanciunas, however, rejoined the Grizzlies for their road trip. He posted a video on Twitter on Friday of him walking to the team plane, saying that he has recovered from COVID-19.

The Grizzlies got back in the gym on Wednesday for their first practice since the stoppage.

“It was a big step getting back together as a team,” Grizzlies coach Taylor Jenkins said. “They were super excited to be back. It was a competitive gym, as we always have.”

The Grizzlies were the “it” team in the league before they were forced to step off the court, having won a season-high five straight games, their longest winning streak since a seven-game run last January. With a win Saturday, Memphis would start a season 5-1 on the road for the first time in franchise history.

In its most recent game, Memphis defeated the Phoenix Suns 108-104, and for the second consecutive game, seven Grizzlies scored in double figures. Ja Morant (17 points, 10 assists) recorded his first double-double of the season. He has only played in five games because of an ankle injury.

“For me, we’ve won five in a row,” Morant said. “Reset button is nowhere. That thought is not in our minds at all. The biggest part for us is getting our condition back up to the game style. Our chemistry has improved since we started playing together, so I feel like that will be there.”

The Spurs’ win Friday was their third straight, and they snapped the Nuggets’ five-game win streak. San Antonio led by just one point after three quarters but outworked the Nuggets in the fourth, using a 7-0 run midway through the period to build an 11-point advantage. The Spurs turned on the defensive pressure down the stretch to seal the victory.

Dejounte Murray added 26 points for the Spurs while Keldon Johnson had 19 and Patty Mills 17.

The Spurs enjoyed a successful follow-up to a Wednesday win over the Boston Celtics, one of the top teams in the Eastern Conference. San Antonio also has wins against the Los Angeles Lakers and Los Angeles Clippers this season and already owns a victory over Memphis, on the road, this season.

“We got to continue to want this finish, you know, no matter how hard it gets, no matter who we’re playing against — the best teams or the bottom teams,” DeRozan said. “We’ve got to come out and be greedy and stay consistent. We’ve got to go out there, play our butts off and compete.”