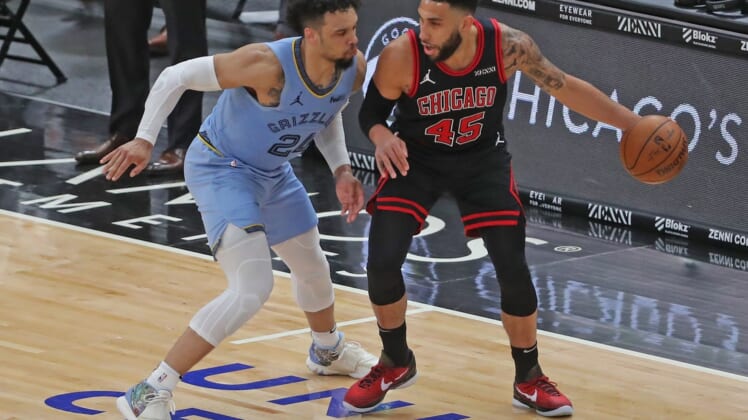 Memphis rode a 37-point third quarter into the final period, when runs of 9-0 and 7-0 helped the Grizzlies build a 20-point advantage.

While committing a season-low six turnovers, Memphis capitalized on Chicago’s 12 giveaways to the tune of a 16-0 advantage in points-off-turnovers. The Grizzlies also finished with a 26-3 edge for fast-break points.

Allen was one of six Grizzlies to connect on multiple 3-pointers, led by Brooks’ 4-of-7. Desmond Bane, Tyus Jones, Xavier Tillman and Killian Tillie all made two triples off the bench, and Memphis finished 17-of-40 as a team.

Tillman and Jones joined in the double-figure scoring with 14 and 10 points. Jonas Valanciunas’ franchise-record double-double streak ended at 16 games with his collecting seven rebounds Friday, but he shot 7-of-9 from the floor for 16 points.

Coby White led the Bulls with 27 points in the loss. He shot 4-of-8 from 3-point range. Nikola Vucevic went 3-of-7 from beyond the arc and recorded 24 points with a game-high 14 rebounds.

Friday’s win kicked off a seven-game road swing for the Grizzlies, and was the first leg of a back-to-back as they aim to solidify their place in the Western Conference’s play-in tournament. The home loss dropped the sputtering Bulls into a tie for the 10th spot and final place in the play-in tournament with Toronto.