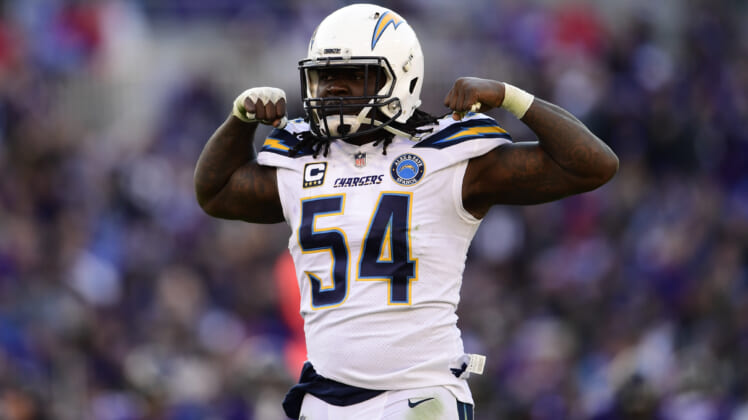 Tyreek Hill might not be the only former Kansas City Chiefs player to take his talents to South Beach this offseason. After nine seasons with the Chargers, three-time Pro Bowl pass-rusher Melvin Ingram spent last year split between the Pittsburgh Steelers and K.C. Chiefs. Now, the 32-year-old sack artist is an unrestricted free agent and is set to visit the Miami Dolphins according to Ian Rapoport.

But he’s been a free agent since March, and there have been few reports linking Ingram to a new team. With most of the big chunks of free agency money already spent, Ingram may once again be looking at a one-year deal.

Free agent market drying up, but not in Miami

As we get closer to the draft, teams are likely eager to see which prospects they can land, taking the chance on potential over the proven veteran. But not the Miami Dolphins, they’ve already spent a large amount of their draft capital and still have $19 million in cap space to spend, so why not bring in a player with 51 career sacks for a free agency visit? It’s not like the team will need to set aside a large budget for their incoming draft class.

Ingram’s best days may be behind him at this point, but the Dolphins don’t need him to be an every-down player. Even if he can come in and help teach younger rushers like Jaelan Phillips the tricks of the trade, that’s already a big win.

For Ingram, having the opportunity to join a team on the rise such as the Dolphins has to sound like a lot of fun. At this point, the 10-year vet likely just wants to find a new home, but it appears he’s still chasing a ring, which would be the first Super Bowl trophy of his career. If he can make it happen.