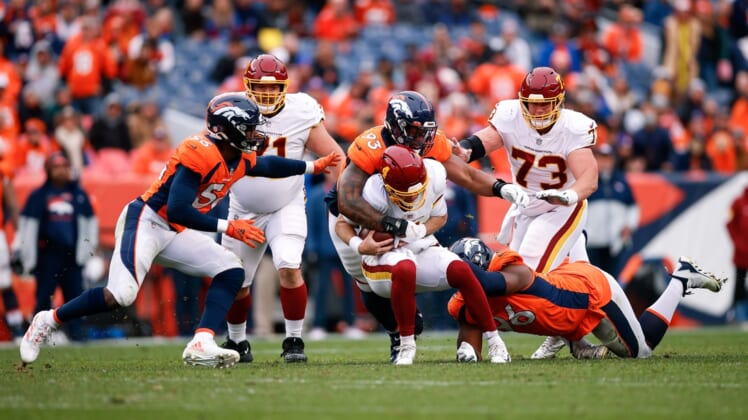 Melvin Gordon III rushed for 47 yards and scored two touchdowns, Teddy Bridgewater was 19-for-26 passing for 213 yards and a score, and the host Denver Broncos beat the Washington Football Team 17-10 on Sunday.

Tim Patrick had three receptions for 64 yards and Justin Simmons had two interceptions for Denver (4-4), which snapped a four-game losing streak.

Taylor Heinicke was 25-for-39 passing for 272 yards, one touchdown and two interceptions, J.D. McKissic had eight receptions for 83 yards and DeAndre Carter caught a touchdown pass for the Washington Football Team (2-6), which dropped its fourth straight game.

Gordon broke a 10-10 tie when he ran it in from seven yards out with 4:28 left. Washington drove to the Broncos’ 8-yard line but eventually an interception in the end zone by Simmons stopped the drive.

Gordon fumbled with 21 seconds left, giving Washington another shot from the Broncos’ 24 but it couldn’t capitalize.

Washington moved to the Denver 27 on its second possession of the game before settling for a field goal try. However, Shelby Harris blocked Chris Blewitt’s 45-yard attempt to keep Washington off the board.

The Broncos used seven plays to get to the Football Team’s 27, and Brandon McManus drilled a 45-yarder to give Denver a 3-0 lead early in the second quarter.

Washington answered with Blewitt’s field goal from 52 yards to tie it, but the Broncos again responded. Bridgewater hit tight end Albert Okwuegbunam twice on chunk plays to get down to Washington’s 15 before throwing a touchdown pass to Gordon to make it 10-3 with 1:11 left in the half.

Neither team had success in the second half but Washington finally broke through when it got the ball at its 6-yard line with 7:02 left in the third quarter.

Washington moved the ball to its 39 and on a third-and-two, Heinicke hit Adam Humphries down the sideline for 23 yards and a first down in Denver territory. Three plays later, Heinicke hit Carter on a 20-yard TD pass to tie it up with 38 seconds remaining in the period.

Later, McManus missed a 53-yard field goal attempt and then the Broncos blocked another Blewitt try, this one from 47 yards.