Megan Rapinoe will ‘take time’ to think about future

Rapinoe, 36, made the comments during an interview on an ESPN morning show when asked whether she’s planning to retire.

“Just in terms of my whole career, I don’t really know yet. I need to take some time to think about it,” Rapinoe told ESPN. “They always say, ‘You’ll know when you know,’ but it’s not really like that, because you could kind of keep going, and it’s like ‘Aw yeah, you’ve accomplished so much, you’ll be fine stepping away.’ But the conversation is always anguished in your mind. Or people just don’t think about it. I’ve been thinking about it a lot.”

Rapinoe was asked about retirement in the wake of Carli Lloyd calling it a career on Monday.

In the interim, Rapinoe said she’ll be returning to her NWSL club, OL Reign in Tacoma, Wash., later this week.

Rapinoe and Team USA garnered the bronze medal in the just-completed Tokyo Olympics.

Rapinoe has tallied 61 goals and 70 assists in 185 caps with USWNT. She is a two-time World Cup winner and won a gold medal in the 2012 London Olympics. 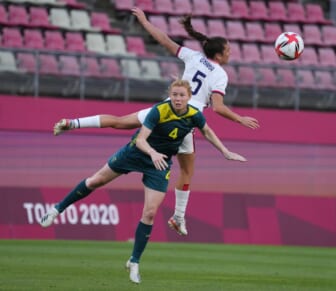 Also Read:
USWNT falls to Canada in semis, loses out on gold