Nearly three years ago, the focus was on saving McKenzie Milton’s leg.

Then the quarterback at UCF, he suffered a near-catastrophic injury to his right leg on Nov. 23, 2018, during the regular-season finale at South Florida. The nerves in his right leg were so damaged and the blood flow so restricted that amputation was a possibility.

No one ever thought Milton would play again. Except for Milton and a group of supporters who were at Doak Campbell Stadium in Tallahassee, Fla., on Sunday night to see him put on a uniform again. This time, it was the garnet and gold of Florida State, where he is on the roster as a graduate transfer. 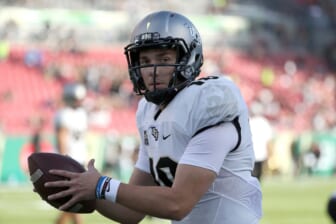 He stood along the sidelines during the first three-plus quarters of the Seminoles’ game with Notre Dame, but when a hit knocked the helmet off the head of starting quarterback Jordan Travis — requiring him to leave the game for at least a snap — Milton entered with a little more than nine minutes left in the game. With the ball near midfield, he engineered a drive that resulted in a 2-yard touchdown run by Treshaun Ward and narrowed Notre Dame’s lead to 38-35.

On the next possession, Milton led a 10-play, 46-yard drive that culminated in a 43-yard field goal to tie the score and put the game in overtime. 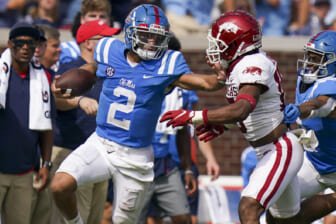 “Nobody has ever come back from an injury like this,” Milton said. “It’s the answer of prayer. Thousands of people praying for me. Coaches believing in me. I’m not here without all the prayers and people believing in me.”

Many of those people were on hand. A group of about 80 family members, friends and medical personnel who had helped him were there to cheer for Milton and the Seminoles.

“I don’t care if he plays another snap ever again,” said Michael Milton, his brother, per Yahoo Sports. “Just seeing him play football again was just awesome.”

“He’s a great competitor,” Florida State coach Mike Norvell said. “It was great to see him get the opportunity to go out there and compete and anybody that knows his story and all that’s gone into it, he’s somebody that you cheer for.”

Travis, the quarterback he replaced, was cheering for him, too.

“I couldn’t get the smile off my face,” Travis said. “Just being someone who’s been through so much. Just seeing him run out on the field gave me chills.”