Mayock Confirms: Time For Carr Haters to Get Lost 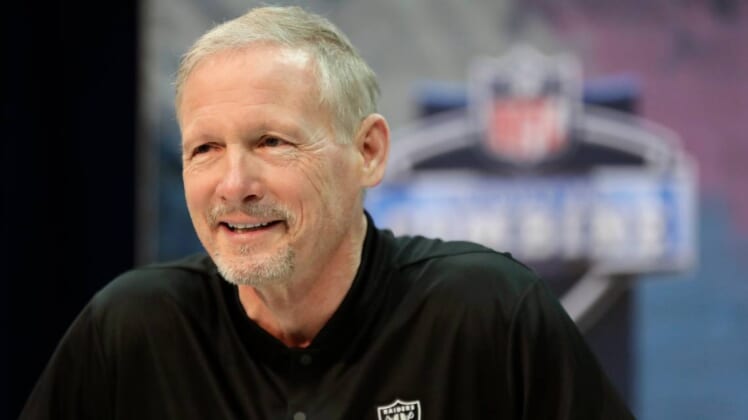 Everyone from keyboard tough guys to ESPN on-air personality Max Kellerman has written off Derek Carr as soft, broken, incapable of winning, and worse. Their assertion since the arrival of coach Jon Gruden is he’s not one of his guys and that his time in Oakland is done.

In his first NFL Combine press conference, Mayock reiterated Carr’s status as the franchise quarterback for the soon-to-be Las Vegas Raiders. Mayock couldn’t have been clearer.

“I think Carr is a franchise quarterback. I truly believe that,” Mayock said during his press conference at the NFL Combine in Indianapolis today. “Now do I also believe that it’s a general manager and head coach’s job to keep your eyes open to improve any position on the football team? Sure. But I think it’s really difficult to try to improve over a franchise quarterback like the one we have in our building right now.”

Despite the clear indication finding a starting quarterback – or future starting QB – isn’t a focus for the team in this year’s draft, those who decry Carr’s performance over the past two seasons won’t like it one bit. Yet with the current situation on this team – where they have holes all over the roster – Mayock’s assertion Carr is their guy, for now, isn’t surprising at all.

It’s time for the Carr haters to get lost, step away from their keyboards and Twitter accounts and be done with it. 2019 will start with Carr at the helm of the “new look” Raiders team rebuilding for their new home in the desert.

I could go into the statistics to show you why Carr is perhaps the most underappreciated quarterback in the NFL, but for those of you who disagree or despise Carr it wouldn’t matter. It’s perhaps the most irrational negative fixation I’ve seen in recent years.

It’s time for the Carr haters to get lost, step away from their keyboards and Twitter accounts and be done with it. 2019 will start with Carr at the helm of the “new look” Raiders team rebuilding for their new home in the desert. He’s got this season to prove all of you wrong and to, most likely, keep his job in the silver and black for years to come. I have no doubt that he will – and then some.

Mayock and Gruden need to add offensive weapons on Carr’s side of the ball and they will. They also need to add a ton of talent and skill and defense to keep their team in games and give Carr a better chance at winning games. I think all of those things get better this year which means Carr will have the opportunity to show the haters their wrong.

When continually pressed on the quarterback position (as the media nationally is obsessed with Carr being on the outs with Gruden), Mayock didn’t stray one bit from his commitment to Carr.

“I mean we’ve we’ve got a young quarterback that we think is a franchise quarterback that’s going to be 28 years old March,” Mayock said when asked about the position on the Raiders. “We’re pretty happy with where we are, especially with our backup quarterback who we signed last year McCarron, we feel like we’re pretty good at the quarterback position.”

For those loopy fans who think Kyler Murray is the answer – all 5-foot-8 inches of him – that’s bad news for you, but great news for the Raiders.

It’s time for the Carr haters to climb back on the bandwagon or get lost.