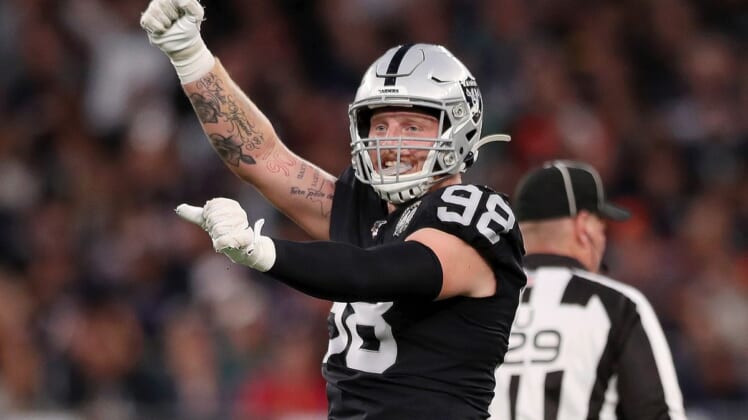 After a dominating four-sack performance in the Raiders win over the Bengals, the fourth-round draft pick is honored for his big week.

While first and second-round picks are usually the players who dominate the conversation during their rookie season, for the Raiders a fourth-round pick out of Eastern Michigan may be the steal of the entire 2019 NFL Draft.

Maxx Crosby was named the AFC Defensive Player of the Week by the NFL today fresh off a dominating performance in the Raiders 17-10 win over Cincinnati last weekend.

Crosby continues to shatter or dent the rookie record book finishing Sunday with five tackles (four solo), including three for loss, four sacks and one forced fumble. According to the Raiders, Crosby’s four sacks last week are tied for second-most by a rookie in NFL history.

The look inside Crosby’s rookie campaign and the numbers he’s putting up are impressive, to say the least. He’s now being noticed and also has racked up numerous records and statistics including:

As our Sr. NFL columnist Moe Moton discussed in his latest analysis, Maxx Crosby is leading the charge amongst the Raiders young defensive line in 2019.

Not bad for a fourth-round pick.