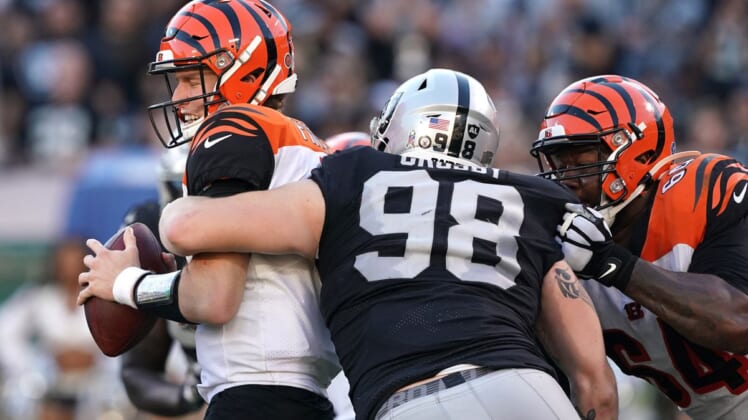 Oakland rookie continues to impress fresh off a four-sack performance against the Bengals.

Last year, antagonizers couldn’t wait to taunt Oakland Raiders fans after every Khalil Mack sack and every whiff at the quarterback from a defender in Silver and Black.

Throughout the year, people made comparisons between one man and an entire defense in terms of ability to wreck the pocket.

Defensive end Maxx Crosby officially arrived on the NFL radar Sunday, recording four sacks. He has 6.5 total, which puts him third among rookies:

The national media caught wind of Crosby’s demolish job on the Cincinnati Bengals offensive line, and he’s become yet another sign of a promising draft class.

We can stop pointing the finger at how bad Oakland’s pass rush looks without the star they traded away for picks. Mack may go on to have a Hall of Fame career, but we could put the comparisons between his dominance and Oakland’s inept pass rush to bed for this season. The Raiders have moved on with some hope upfront.

The Build-Up Before the Breakout

Coming out of Eastern Michigan, Crosby stood 6-foot-5, 255 pounds. He had a lean frame, but his collegiate tape showed a high motor and athleticism. More importantly, the 22-year-old drew attention as a disruptor all over the field, stalking quarterbacks, chasing down running backs and batting down passes.

After the draft, general manager Mike Mayock suggested Crosby needed to add strength to become an effective pass-rusher in the pros. The rookie fourth-rounder took the challenge seriously and looked forward to it, per NBCS Bay Area’s Scott Bair.

“They just want me to get stronger,” Crosby said in May. “I don’t think weight is the biggest issue, I’m around 255 right now. I just have to keep getting stronger and I have all summer to do that. I’m going to do everything I can to make that happen.”

In addition to physical development, Crosby made strides in a cerebral approach thanks to defensive line coach Brentson Buckner, per The Athletic’s Vic Tafur.

“Coach Buck really helped me on the mental side of things,” Crosby said. “At first, I thought everything was going so fast. I was thinking too much and my technique wasn’t all there, but having him is super helpful.”

Buckner, who helped improve the Tampa Bay Buccaneers defensive line in terms of pocket pressure last year, seems like the pass-rusher whisperer in the league. The Raiders have nearly doubled their 2018 sack total (13) with 25 through 10 games.

Crosby earned a nickname after his stellar performance Sunday. NFL Network’s Brian Baldinger called him “The Condor,” which is a large flying bird with a massive wingspan. He further explains his description in a breakdown:

Baldinger goes in-depth on his player assessment through the film cutup. Crosby’s four sacks made headlines, but the first-year defensive end also played the run, flushed quarterback Ryan Finley out of the pocket and pressured him on the final throw, which became a game-sealing interception for rookie cornerback Trayvon Mullen.

Similar to his collegiate tape, Crosby showed a relentless push toward the pocket. He’ll swipe, speed rush or loop inside to reach the quarterback. Finally, like a condor, he can spread his arms and engulf his target. On multiple occasions, Finley couldn’t escape the defensive end’s grasp.

What Makes Crosby So Special?

Let’s look past Sunday’s eye-popping sack number. What did Crosby do to show high potential despite his fourth-round draft tag? How is he on the same level with the likes of Nick Bosa and Josh Allen, who were selected within the top 10 this year?

Crosby doesn’t just look for the sack. He wants the football as well. The young defender is tied with Benson Mayowa for a team-leading three forced fumbles.

As you can see in Baldinger’s video, Crosby can attack from either side of the line, which allows defensive coordinator Paul Guenther to add an element of pre-snap surprise. Where is the active pass-rusher going to line up?

More importantly, Crosby is effective regardless of his spot on the line. According to Pro Football Focus, he’s recorded 11 pressures on each side with five sacks on the right and four quarterback hits on the left.

Crosby doesn’t just look for the sack. He wants the football as well. The young defender is tied with Benson Mayowa for a team-leading three forced fumbles.

In today’s NFL, there’s an emphasis on the strip-sack to avoid excessive hits or falling full weight on the quarterback. Crosby has racked up some fines—some for questionable calls—but it’s encouraging to see him adjusting to the rules and attempting to force a turnover. He’s obviously a quick learner and should continue to develop under Buckner.

Finally, Baldinger hinted at Crosby’s wingspan. The rookie’s reach will allow him to knock the ball out of quarterback’s hands when he can’t bear hug the passer for a sack. He’s already batted down three passes. Guenther is known for dropping defensive lineman into shallow coverage, so the 22-year-old fits right in with an ability to disrupt the short passing game with his timing and range.

We don’t need to peer over at what Mack is or isn’t doing in Chicago to praise what Crosby has done in 10 games. The former accomplished so much in his six seasons and gave everything he had as a premier pass-rusher with the Silver and Black. In no shape or form, does the rookie have to measure up to the Bears edge-rusher.

Like the Raiders last year, we can turn to a new chapter. Keep the memories that shall remain from Mack’s four years in Oakland but look forward to a bright future for the club’s defensive line.

With Buckner and Guenther working together, the Raiders pass rush has a pulse. They’re working on Clelin Ferrell, who had a standout performance against the Los Angeles Chargers in Week 10, logging 2.5 sacks. Crosby showed flashes early in the year, and he broke through in a big way. Mayowa is having his best year with a career-high seven sacks.

Weeks ago, fans with their virtual pitchforks wanted Guenther fired—now they’re inclined to wait it out and see the defensive progress through the year. Crosby’s potential has translated immediately. He may be a Day 3 gem who’s just scratching the surface, but the youngster is able to produce because of the quality coaching on staff.

When is the last time fans could actually put strong collective faith in the general manager, whose class is shaping up quite well, the coaching staff and the team’s future?

The Raiders weren’t supposed to be playoff contenders this year, but they’re way ahead of our arbitrary schedules. Yes, giving up Mack hurt at the time, but painful decisions can lead you to unexpected growth—it just takes some patience.