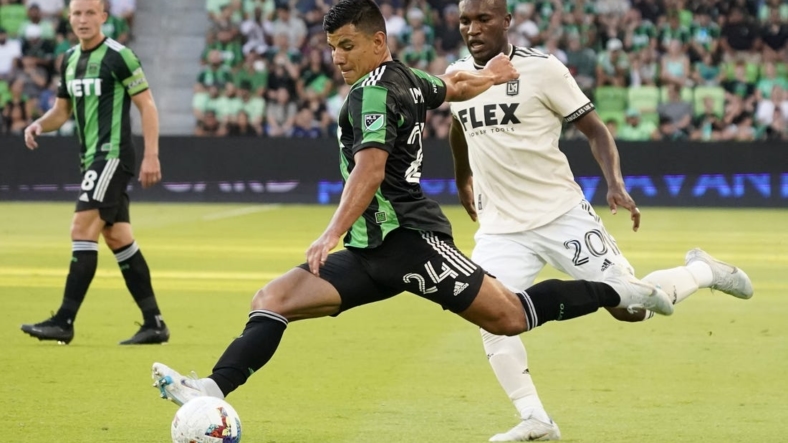 Maximillian Urruti scored two goals in a four-minute span of the second half and Diego Fagundez added a goal and two assists as Austin FC rolled to a 4-1 win over visiting Los Angeles FC on Friday in the matchup of the top two teams in the Western Conference.

The win, in arguably the most important game in Austin FC’s two-year existence, allowed the home side (15-6-6, 51 points) to pull to within six points of West leader LAFC (18-6-3, 57 points) with seven matches to play in the regular campaign. Austin swept the two games from LAFC this season.

LAFC, which has dropped two straight matches after a club-record seven-game winning streak, is still on top of the Supporters’ Shield standings. LAFC is still on pace to break the all-time MLS points record (73) as set last season by New England.

Austin got on the board in the 32nd minute when Fagundez curled a direct free kick over the LAFC defensive wall and into the top right corner of the net just beyond the outstretched arms of leaping goalkeeper Maxime Crepeau.

Austin FC caught fire in the first 13 minutes of the second half.

Urruti scored twice in the initial six minutes, first on a nifty header that redirected a centering pass from Nick Lima in the 47th minute and then from a tough angle when he took a pass from Fagundez and dribbled nearly to the end line before placing a left-footed shot across the goalmouth to the far post in the 51st minute.

Sebastian Driussi added to the lead in the 58th minute with his league-leading 19th goal, taking yet another pass from Fagundez and spinning around LAFC defender Jesus Murillo before also finding the inside of the far post for Austin’s fourth goal.

It was the 10th straight game that Driussi, the erstwhile MVP candidate, has either scored or assisted on a goal.

LAFC finally answered in the 61st minute as Cristian Arango scored on a ringing volley after Austin goalkeeper Brad Stuver had stopped a shot by Jose Cifuentes.