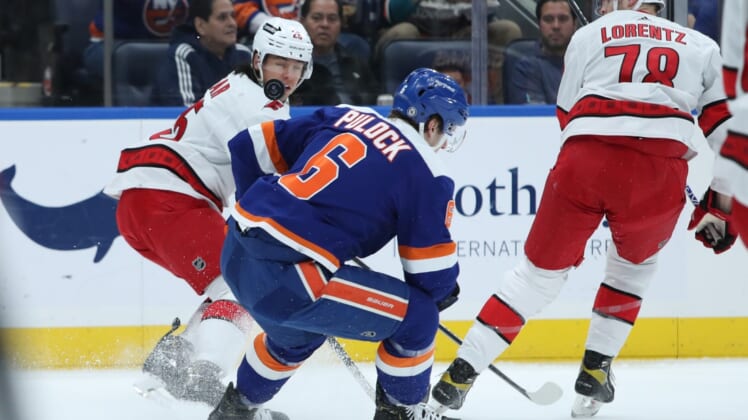 Max Domi scored the game-winning goal 5:40 into the third period as the visiting Carolina Hurricanes moved closer to clinching the Metropolitan Division with a 5-2 win over the New York Islanders on Sunday in Elmont, N.Y.

Derek Stepan and Seth Jarvis scored in the first period and Jesper Fast and Brendan Smith converted into the empty net in the third for the Hurricanes (52-20-8, 112 points).

Carolina won its fourth straight game to increase its lead to four points over the idle New York Rangers (51-22-6, 108 points) in the Metropolitan. The teams will square off on Tuesday night at Madison Square Garden in New York. Carolina will clinch the division with a win.

Pyotr Kochetkov, who won his NHL debut in Saturday’s 3-2 overtime win over the New Jersey Devils, made seven saves in relief of Antti Raanta. Raanta stopped 17 of 18 shots before exiting with a lower-body injury in the second period.

Ross Johnston scored in the first period and Ryan Pulock tied the game in the second for the Islanders (35-34-10, 80 points), who have lost five straight games (0-4-1). Semyon Varlamov recorded 29 saves in the loss.

The Hurricanes scored on their first shot after Stepan needed one motion to pick off Noah Dobson’s no-look pass intended for Zdeno Chara deep in the New York zone. Stepan then beat Varlamov at the 2:25 mark.

Jarvis, stationed to the left of Varlamov, took a pass from Andrei Svechnikov and flicked a shot over Varlamov’s glove and off the top of the net for a power-play goal with 11:51 left.

Johnston redirected Matt Martin’s shot with 1:35 remaining to begin the Islanders’ comeback attempt. Pulock tied the score with 4:33 left in the second by firing a shot that sailed past Kochetkov, who was screened by New York’s Zach Parise.

Teuvo Teravainen set up the game-winning goal by passing from behind the net to Domi, who beat Varlamov from point-blank range. Fast iced the game with 2:07 left before Smith added another empty-net goal.