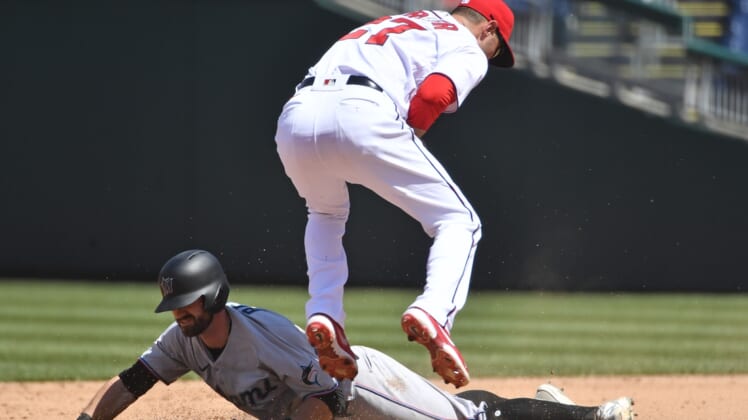 Max Scherzer tossed a complete game, allowing one run on five hits and striking out nine to lead the host Washington Nationals to a 3-1 win over the Miami Marlins on Sunday afternoon.

Ryan Zimmerman provided the Nationals with all the offense they would need with a three-run home run in the top of the third inning off Marlins rookie Trevor Rogers.

The Nationals won their fourth in a row and swept the Marlins, who finished a 10-game road trip with a 3-7 record.

It was Scherzer’s 12th career complete game and his second against the Marlins. Scherzer (2-2) also recorded his 14th career win over the Marlins, which is his most against any team.

Rogers, who entered the game with a 1.29 ERA over his first five starts (28 innings) of the season, lasted five innings on Sunday and gave up four hits, struck out six and walked three on 77 pitches.

Scherzer threw eight shutout innings until Marlins second baseman Isan Diaz belted a 95-mph fastball over the left center field wall for a solo home run. The 406-foot blast was Diaz’s second hit of the game as he went 2-for-4 in his fourth game since being recalled from Miami’s alternate training site.

Scherzer bounced back from his rough outing last Tuesday against the Blue Jays by not allowing a walk and pitching at least six innings for the fifth time in six starts this season.

Zimmerman crushed a 96.7-mph fastball up in the zone from Rogers for a 430-foot home run to center field. The blast came with two outs and on an 0-2 count.

Rogers walked Victor Robles and gave up a single to Josh Harrison. Rogers picked off Robles trying to steal third, but then walked Trea Turner, setting up Zimmerman’s homer.

Rookies Monte Harrison and Jose Devers also each recorded their first hits of the season with singles off Scherzer. Harrison’s hit gave the Marlins a baserunner with one out in the eighth. But Harrison tried to steal second and was tagged out after sliding off the bag. Scherzer struck out Adam Duvall to end the inning.