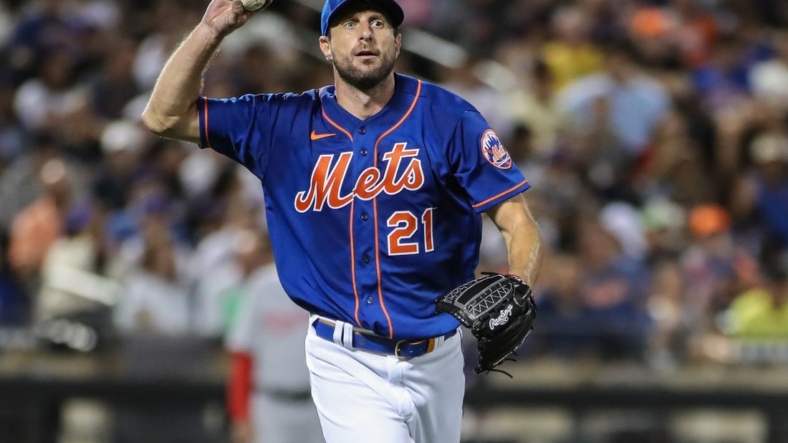 The Milwaukee Brewers will turn to Corbin Burnes on Monday as they continue their wild-card chase against the visiting New York Mets, who are expected to activate Max Scherzer off the injured list in a matchup of ace right-handers to open a three-game series.

The Mets (93-55) have a one-game lead over Atlanta in the National League East, while the Brewers (78-68) are two games behind the Phillies for the final NL wild-card spot.

Milwaukee failed to complete a series sweep at home against the Yankees, losing 12-8 on Sunday. Kolten Wong staked Milwaukee to a 3-0 lead in the first with a three-run homer, but the Yankees rallied behind five homers, including two by Aaron Judge.

“We had a lead in the game, I think that’s what’s a little frustrating,” Brewers manager Craig Counsell said. “Obviously there was a long way to go and it was an early lead, but we scored a bunch against a really good pitcher. Unfortunately just weren’t able to keep the runs off the board.”

The Mets completed a four-game sweep of the Pirates with a 7-3 victory on Sunday, with New York pitchers combining for 20 strikeouts, including 13 by starter Jacob deGrom in five innings.

Scherzer (9-4, 2.26 ERA) has been sidelined since Sept. 4 with left oblique irritation. He made a rehab start at Triple-A Syracuse on Wednesday, allowing one run in 3 2/3 innings with seven strikeouts.

“My overall command wasn’t quite as sharp, but you kind of know that when you skip a start,” Scherzer said after the rehab start. “The shape of all the pitches are there, but some of the executions are just not quite as crisp as they need to be. But, that’s just what happens when you skip starts. That’s why I wanted to come here, get in a game, get the flow of the game, kind of make those mistakes, and now I can sharpen up and get ready for my next start.”

Scherzer is 3-2 with a 2.56 ERA in his last seven major league starts. He allowed one run on three hits in five innings in his last start prior to going on the IL, but did not get a decision in a 7-1 loss to the Nationals.

Scherzer is 2-3 with a 2.37 ERA in 10 career appearances against Milwaukee, including nine starts.

“I thought there was times in the game where he was very dominant, unfortunately two pitches he threw got hit for home runs,” Counsell said after Burnes’ last start. “Those were balls that looked like pretty much the middle of the plate, so they deserve credit for that, for doing damage on pitches to hit. But, he definitely pitched very well.”

Burnes, last year’s Cy Young Award winner, is 2-0 with a 1.71 ERA in four career games against the Mets, including three starts. He got the victory in a mid-June matchup against New York, giving up two runs in six innings in a 10-2 Brewers win.