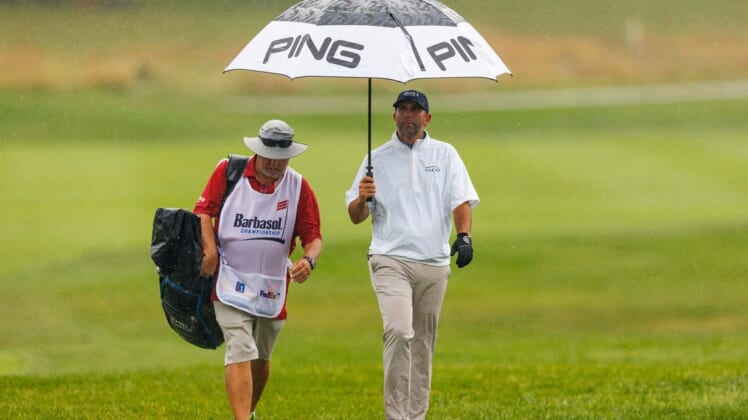 PGA Tour rookie Max McGreevy owns the clubhouse lead Saturday just a few holes into his third round after a rain-shortened day at the Barbasol Championship in Nicholasville, Ky.

The event has been marred by massive delays both Friday and Saturday.

About 2 1/2 inches of rain fell on Keene Trace Golf Club on Saturday, causing a delay of five hours and 28 minutes. That followed more than five hours’ worth of delays Friday due to dense fog and rain.

McGreevy shot 63 in the second round and was 1 under through three holes to begin his third when play was suspended because of darkness. No players have completed the third round.

McGreevy sits at 17 under, one stroke ahead of Matti Schmid of Germany and Canada’s Adam Svensson. Portugal’s Ricardo Gouveia is at 15 under in solo fourth while three other players are three shots back at 14 under.

McGreevy took advantage of the soft conditions to card 10 birdies against one bogey for his second-round 63.

“I don’t know if I put 10 birdies together in a tournament the last couple of weeks, so to put it together in one round regardless how easy the course was playing felt really good,” McGreevy said.

Scott Brown aced the 191-yard 16th hole, marking his seventh hole-in-one on Tour, the third-most on record (since 1983).