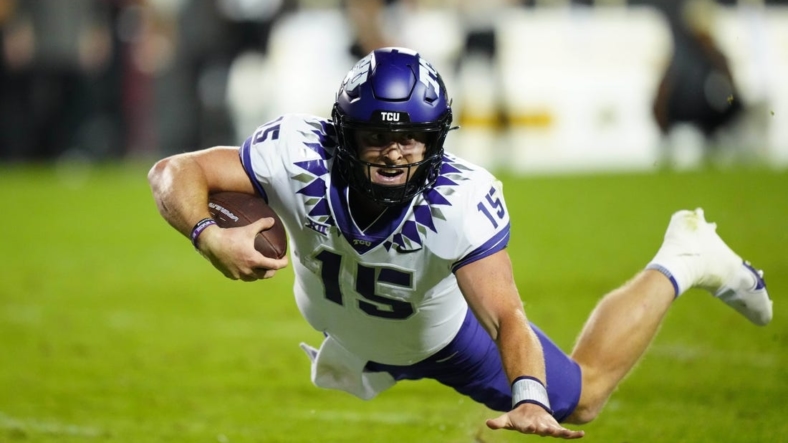 Max Duggan threw for 390 yards and five touchdowns, two of which were to Quincy Brown, as TCU strolled to a 59-17 win over Tarleton on Saturday in Fort Worth, Texas, in the first-ever game between the two schools.

Duggan began the season as a backup but re-assumed the starting role after a knee injury to starter Chandler Morris in the second half of the Horned Frogs’ season-opening win at Colorado. He made a strong case to keep the job, passing for a career high in less than three quarters of work to lead TCU (2-0) to an easy victory.

Tarleton, which plays in the Western Athletic Conference, was led by Beau Allen’s 210 yards passing. Deangelo Rosemond had a rushing TD and Darius Cooper had 117 yards receiving and hauled in a scoring pass from Allen for the Texans (1-1).

The Horned Frogs scored on their first possession of the game, driving 62 yards in eight plays to Duggan’s 19-yard TD pass to Derius Davis. After an interception by Josh Newton, Duggan hit Jared Wiley from 6 yards away, and Davis ran for the two-point conversion to push TCU’s lead to 14-0 halfway into the first quarter.

Miller ran 1 yard to a score with 3:16 to play in the first quarter before Duggan found Brown for a 2-yard TD pass early in the second as the Horned Frogs went up 28-0.

The Texans finally got on the board with a 21-yard pass from Allen to Cooper at the 10:14 mark of the second quarter. Sam Jackson added a 1-yard run midway through the quarter, and Luke Laminack kicked a 36-yard field goal to give TCU a 38-7 advantage at the break.

Tarleton cut its deficit to 24 points on Rosemond’s 1-yard run to open the third quarter before Duggan produced TD passes to Brown and Hudson of 17 and 29 yards, respectively.