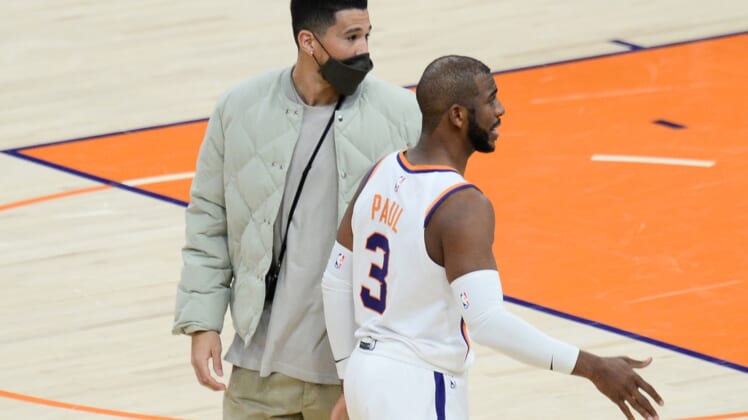 The Dallas Mavericks own a season-worst, four-game losing streak, and superstar Luka Doncic is mighty peeved.

Dallas looks to halt its skid and lower the frustration level when it hosts the Phoenix Suns on Saturday in the first of two consecutive matchups between the clubs.

The Mavericks’ latest two setbacks both came against the red-hot Utah Jazz, and Friday’s game barely qualified as a competition. Dallas trailed 37-12 after the opening quarter and was behind by as many as 30 before succumbing 120-101.

Doncic also was upset Wednesday after Dallas’ 116-104 loss to the Jazz, and his personal dissatisfaction was a few octaves higher after the Friday game.

“Terrible. There’s really not much to say,” Doncic said of the performance. “We’ve got to do something. This isn’t looking good. We’ve got to step up and talk to each other and play much better than this. It’s mostly effort.”

Areas in which Dallas got outworked by the Jazz included the boards and the perimeter. Utah held a 56-40 rebounding advantage and made 20 of 48 3-point attempts while Dallas was just 9 of 33.

That’s not good enough in the eyes of Doncic, who isn’t seeing a winning-type attitude five-plus weeks into the season.

“Right now it’s looking like we don’t care, honestly, if we win games or not,” Doncic said of a team that is a disappointing 8-11. “We need more energy, more effort. Dive for every ball, box out. Everything. There’s a lot of things we can improve.”

Said Mavericks coach Rick Carlisle: “This is a tough stretch. We got to fight through it. Right now, it is about sticking together and fighting our way through this thing.”

Doncic scored 25 points Friday, and he has played well individually over the past five games, averaging 30.4 during that stretch.

Teammate Kristaps Porzingis is one of the struggling Dallas players. He is shooting just 36 percent (18 of 50) over the past three games, and had just 11 points on 4-of-14 shooting on Friday.

Phoenix will aim to defeat the Mavericks for the fifth straight time. The teams met in the season opener on Dec. 23 with the Suns claiming a 106-102 home win.

Phoenix will be without star guard Devin Booker (hamstring) for the fourth consecutive game as it opens a three-game road swing that includes another game in Dallas on Monday before ending in New Orleans on Wednesday.

The Suns lost their first two games without Booker as part of three straight setbacks before putting together a stellar 114-93 home triumph over the Golden State Warriors on Thursday.

“That’s the kind of basketball we want to play,” Suns coach Monty Williams said. “That’s the level I’m going to hold the guys to — 34 assists, the ball movement, the player movement, that’s who we are. The balance was much better.”

Phoenix got a solid lift from reserves Abdel Nader and Frank Kaminsky, who each played 25 minutes.

Nader scored a season-high 16 points for his second straight double-digit outing. Kaminsky scored a season-best 12 points, matched his career high of 13 rebounds and had a career-best eight assists as he flirted with his first career triple-double.

“Frank’s been amazing, making the job way easier for guys like myself,” Nader said of Kaminsky. “A big man with his head up and making those passes is huge.”

Bridges sank 6 of 10 field-goal attempts while posting his fourth 20-point effort of the campaign. He made just 7 of 22 shots while averaging nine points over the previous two games.