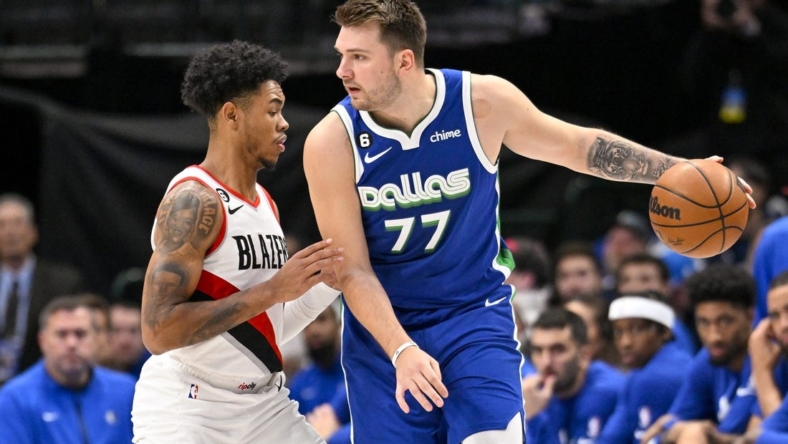 Luka Doncic collected 42 points, 13 rebounds and 10 assists, and Spencer Dinwiddie made six 3-pointers to fuel the host Dallas Mavericks to a 117-112 victory over the Portland Trail Blazers on Saturday.

Doncic made 13 of 22 shots from the floor and 15 of 18 from the foul line as a means to atone for what he labeled as a pair of “awful” performances during Dallas’ two-game losing skid. The three-time All-Star’s “awful” performances consisted of 24 points, six rebounds and six assists in the Mavericks’ loss to the Orlando Magic on Wednesday and 22, nine and six, respectively, in a setback at Washington on Thursday.

Dinwiddie finished with 20 points, seven rebounds and six assists, and Christian Wood added 19 in his return from a two-game absence due to a sprained knee. Tim Hardaway Jr. had 16 points off the bench for the Mavericks, who shot 50.6 percent from the floor to improve to 6-1 at home this season.

Jerami Grant scored a season-high 37 points and Damian Lillard recorded 29 points and 12 assists for the Trail Blazers, who saw their three-game winning streak come to a halt in the finale of their six-game road trip.

Dinwiddie drained a pair of 3-pointers to stake Dallas to a 109-106 lead with 1:52 remaining in the fourth quarter. Lillard answered with a layup before Dinwiddie converted again from beyond the arc. Dorian Finney-Smith added another 3-pointer to extend the Mavericks’ lead to 115-108 with 54.2 seconds left to seal the win.

Anfernee Simons converted an alley-oop layup to give Portland a 98-92 lead before Dallas scored the game’s next nine points. The Trail Blazers evened the score with three free throws before Lillard’s layup gave them the lead, however Doncic answered with a layup of his own.

Hardaway sank a pair of 3-pointers and Dinwiddie added one of his own to give Dallas a 49-33 lead with 7:55 remaining in the second quarter. The Trail Blazers responded with a 24-6 run to claim a two-point advantage before Doncic drained a pair of free throws and a jumper to give the Mavericks a 59-57 lead at halftime.