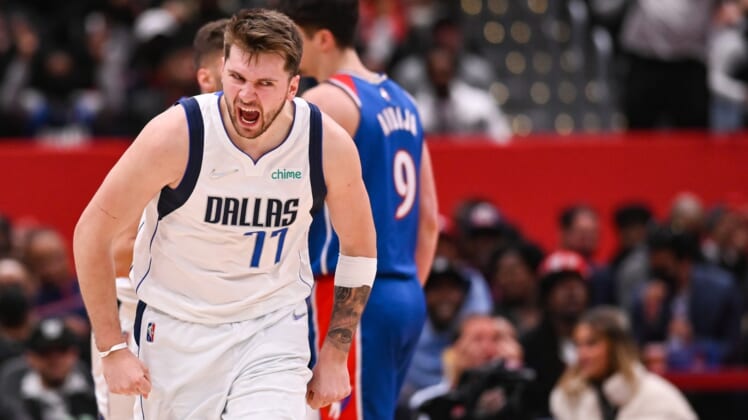 Luka Doncic and the Dallas Mavericks still have plenty for which to play during the final week of the regular season.

The Mavericks can clinch a 50-win season with a victory at Detroit on Wednesday, which will also be the team’s final road game of the regular season. They can still finish as high as third place in the Western Conference.

At worst, Dallas wants to secure the No. 4 spot in the conference standings to get home-court advantage in the opening round of the playoffs.

“We kind of had to bounce back after the game in Washington,” Doncic said. “Our goal is to get home (court) advantage and we’re so close. We’ve got three games left, and that’s our goal right now.”

Getting 50 victories would also be a significant feat. The last time the Mavericks did that was the 2014-15 season.

Dallas has won four of its last five games with Doncic scoring at least 32 points in each of those contests. He has averaged 28.3 points, 9.1 rebounds and 8.7 assists, although he hasn’t generated much buzz for the MVP award.

If Doncic reaches the 30-point mark against the Pistons, he would tie Mark Aguirre’s franchise record for consecutive 30-point outings at six. Aguirre set that record from Nov. 30-Dec. 7, 1983.

“He’s able to pick apart whatever defenses throw at him,” Mavericks backcourt partner Jalen Brunson said. “He tries to put guys in the right positions to succeed, and it’s on us to kind of help him. He’s the orchestrator out there.”

Doncic racked up 33 points, 11 assists and seven rebounds in the first meeting with Detroit, a 116-86 romp at Dallas on Feb. 8.

The Pistons (23-56) will seek their first four-game winning streak since they collected five straight victories March 2-10, 2019.

Pistons rookie-of-the-year candidate Cade Cunningham sat out Sunday’s game against Indiana and only played eight minutes against Oklahoma City on Friday. Several other rotation players have been resting or nursing injuries in recent games, but coach Dwane Casey is getting solid production from just about anyone he puts on the floor.

“These guys are coming in and playing the right way, playing hard and that’s the sign of a good culture,” he said. “Our guys are professional because they have every reason to turn it off right now and get ready for the summer, but they haven’t. They’re dedicated, they’re professionals and that’s what you want to build your team around.”

One of those building blocks is second-year forward Saddiq Bey, who made six 3-pointers in the first six minutes of Detroit’s 121-117 win against the Pacers. He finished with 31 points in 23 minutes.