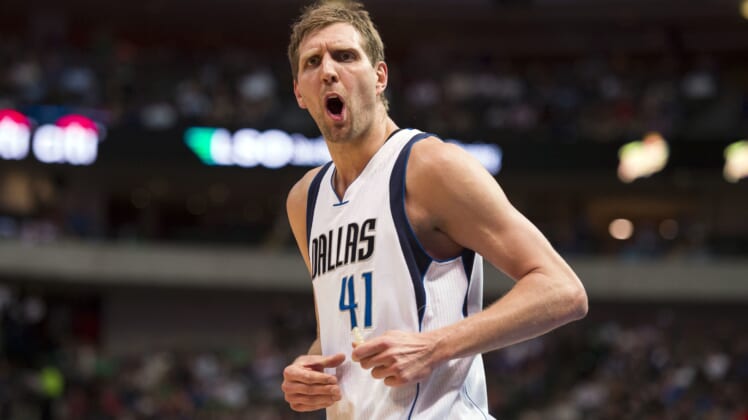 In an attempt to get further under the cap while potentially going after top-end free agents, the Dallas Mavericks have reportedly declined the 2018-19 option on future Hall of Famer Dirk Nowitzki’s contract.

The Mavericks, in a mutual decision with Dirk Nowitzki, are declining Nowitzki's $5 million team option for next season and plan to hash out a new contract with him in July, according to league sources. Full @NYTSports coverage: https://t.co/czXwb3EMow

In no way can this be considered a surprise. Dirk has already announced he’s returning for a 21st season in the NBA. It’s almost undoubtedly going to be as a member of the Mavericks.

Dallas’ decision to decline Nowitzki’s contract is all about giving the team flexibility to add more star power.

This came mere minutes after Los Angeles Clippers center DeAndre Jordan decided to opt out of his contract for next season. Heavily linked to Dallas, Jordan could very well sign with the team over the next few days.

Removing Dirk’s $5 million salary only helps the Mavericks in this regard. They can easily re-sign him to a lesser deal as the calendar strikes July.

Nowitzki, 41, averaged 12.0 points and 5.7 rebounds in less than 25 minutes of action per game last season. Clearly on the downswing of his career, the Mavericks are doing everything possible to help the all-time great go out on a high note. This move is indicative of that.