Mavericks come back strong with triumph over Rockets 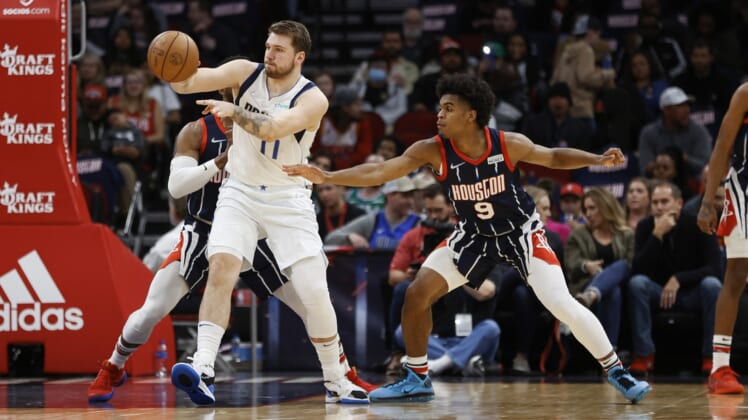 Dwight Powell joined Luka Doncic with double-doubles Friday night as the Dallas Mavericks rebounded from a 30-point trouncing at the hands of the New York Knicks with a 113-100 romp over the host Houston Rockets.

Powell had a season-high 26 points and a season-high-tying 12 rebounds for his first double-double of the season and just his third in the last three years for the Mavericks, who successfully put a 107-77 home loss to the Knicks on Wednesday in the rear-view mirror.

Doncic paced Dallas with 30 points and a game-high 14 rebounds for his 35th double-double of the year.

Kevin Porter Jr. and Josh Christopher shared team-high scoring honors with 17 points apiece for the Rockets, who were coming off a 139-130 overtime win over the Los Angeles Lakers at home on Wednesday.

This one wasn’t competitive for long, even after Houston jumped out to a 13-8 lead in the first five minutes.

In winning for the sixth time in its last seven games, Dallas went up for good on a Davis Bertans 3-pointer four minutes later and left the hosts behind for good well before running up a 67-44 lead at the break.

Powell’s 26 points came on 9-for-11 shooting. They were three more points than his previous high this season, set twice.

His 12 boards equaled the 12 he amassed in November at Phoenix.

Doncic had been held to a rare single-double by the Knicks. His 30-point effort against the Rockets ran his streak of 20-point games to 12.

Spencer Dinwiddie chipped in with 16 points and a team-high seven assists, while Trey Burke had 15 points and Josh Green 10 for the Mavericks, who won despite being outshot 47.7 percent to 45.5 percent.

Dallas, which now embarks on a rugged three-game stretch of games against the Boston Celtics, Brooklyn Nets and Philadelphia 76ers, outscored Houston 33-18 on 3-pointers, with Doncic’s five treys being just one fewer than the Rockets totaled as a team.

Porter had three 3-pointers to account for a majority of his 17 points for the Rockets, who also had a victory over the Memphis Grizzlies among their last four games.

Bruno Fernando added 16 points as part of a double-double with a team-high 11 rebounds, while K.J. Martin and Jalen Green had 11 points apiece for Houston, which fell to 2-6 in a run of 10 straight matchups with playoff hopefuls.