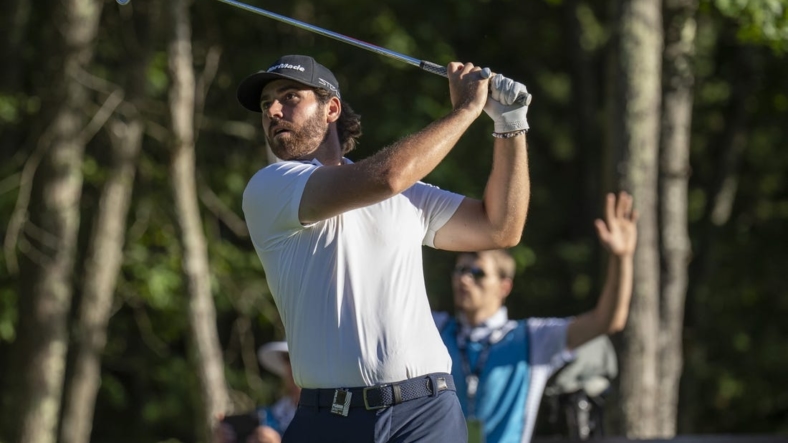 Matthew Wolff made the first hole-in-one in LIV Golf history and shot a 7-under-par 63 to share the lead with Talor Gooch at the first round of the LIV Golf Invitational Boston on Friday.

Newcomers Cameron Smith of Australia and Joaquin Niemann of Chile, two of the highest-ranked players the Saudi-funded upstart tour has scooped up since its debut, each shot 6-under 64 and are tied for third.

Wolff’s ace came at the par-3 second hole at The International in Bolton, Mass. He landed his tee shot directly in front of the pin, and after one short hop it fell in the cup.

It was part of a busy card for Wolff, who also made an eagle at the par-5 12th hole and had six birdies and three bogeys.

“I’m having a really good time. I don’t know about you,” Wolff said. “It’s just everyone is having a blast. It was really cool to do that in front of — on a part of the golf course where there’s a lot of fans, and to be the first one to have an ace at LIV Golf is really good, but obviously it’s still just first round of the tournament, and got to keep the pedal down.”

Gooch rolled in eight birdies and had just one bogey on the day.

Smith, who won The Open Championship in July for his first major title, had two eagles on his round, along with five birdies, a bogey and a double bogey. After chipping in for an eagle 3 at the eighth, Smith’s last hole was the par-5 18th, where he sent a long, uphill putt straight in.

Two holes earlier, he smacked the shaft of his wedge on a tree during a follow-through and managed to save par.

“That round kind of had a bit of everything, very up-and-down,” Smith said. “Probably wasn’t one of my best driving performances there. I was a bit disappointed with how I drove the ball, especially around here. I think I maybe got away with a few that I shouldn’t have. So something to work on tomorrow.”

It was Lahiri’s LIV debut, along with Harold Varner III, who shot a 3-under 67 to join a large tie for 10th that also included Dustin Johnson.

Also joining the tour earlier this week were Marc Leishman of Australia and Cameron Tringale. Leishman opened with an even-par 70 and Tringale had a 1-over 71.

Phil Mickelson was in 45th place out of 48 golfers after posting a 4-over 74.

Despite Mickelson’s rough score, his team, Hy Flyers, held a narrow lead in the team competition thanks to Wolff, Wiesberger and Tringale. Their combined score of 11 under par was one shot better than 4 Aces, LIV’s top team so far, consisting of Gooch, Johnson, Pat Perez (3-under 67) and Patrick Reed (1-under 69).