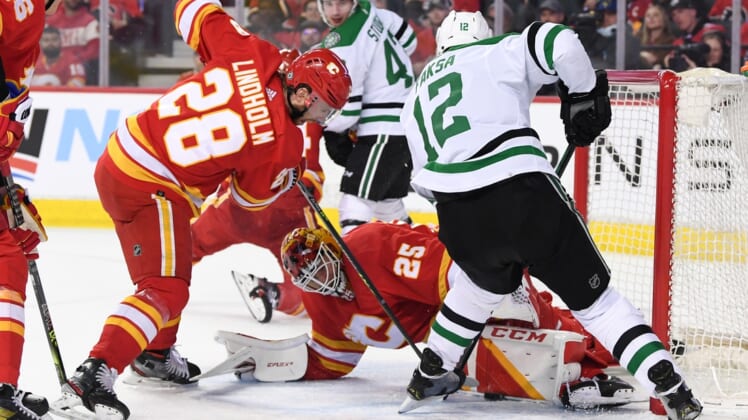 Matthew Tkachuk reached the 40-goal and 100-point plateaus and Christopher Tanev’s third-period goal broke a tie and gave the host Calgary Flames a 4-2 victory over the slumping Dallas Stars on Thursday.

For the first time since 1990-91, Calgary boasts a pair of 100-point players, as Johnny Gaudreau is already beyond the century mark. Andrew Mangiapane had a goal and an assist and Noah Hanifin also scored for the Flames, who are on an 8-1-1 tear. Jacob Markstrom made 21 saves.

With the score tied 2-2, Tanev put the Flames ahead a third time with 6:55 remaining in regulation. The defenseman received a lucky break when his wrist shot from the point banked off Glendening and past Oettinger. Tanev’s sixth goal of the season ties a career high.

Mangiapane notched his 35th goal of the season with a final-minute empty-netter in the back-and-forth affair.

Tkachuk, who also became the first Flames player to reach 40 goals since Jarome Iginla in 2010-11, opened the scoring just past the midway point of the second period. He tucked home a puck from the side of the net on a power play.

Robertson replied with a power-play goal of his own 1:47 later. Off a faceoff victory, Robertson ripped a top-corner wrist shot for his 38th of the campaign to even the count.

Hanifin’s ninth goal of the season 20 seconds into the third period — his point shot ricocheted off Dallas defenseman Miro Heiskanen — again put the Flames ahead.

However, Glendening again drew the Stars soon after. Fredrik Karlstrom, in his NHL debut, took advantage of a turnover for a partial breakaway. His chance was stopped, but Glendening followed up for the rebound tally at the 5:29 mark of the third period.