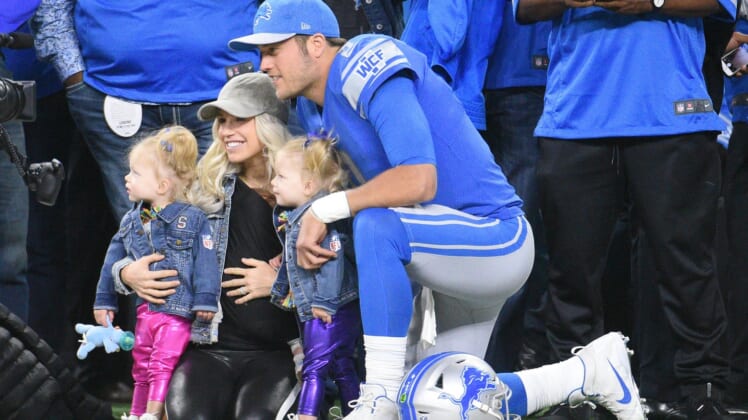 Matthew Stafford’s roots in Georgia date back to his father attending graduate school in Athens when the Detroit Lions quarterback was a child. Stafford himself starred for the Bulldogs before being the No. 1 overall pick in the 2009 NFL Draft.

By now, it’s well known that Georgia represents a huge part of what the Pro Bowl quarterback has turned into as an adult. He’s now paying it forward in a big way.

Matthew Stafford and his wife donate $350,00 to social justice program at University of Georgia

“I am grateful to Matthew Stafford and coach Kirby Smart for their generous gifts to fund this important initiative and am excited about the opportunity the program presents for us to promote an inclusive culture among our student-athletes, coaches and staff,” Georgia President Jere W. Morehead said in a statement, via ESPN’s Michael Rothstein.

The program was created under the guise of enacting education programs and different opportunities in the areas of diversity, inclusion and social justice.

The state of Georgia has taken center stage amid the ongoing Black Lives Matter movement following the murder of an African-American man by the name of Ahmaud Arbery back in February. Since then, Atlanta has been among the epicenters of protests around the United States. This obviously isn’t lost on Stafford and his wife, Kelly.

Playing in another downtrodden city in that of Detroit, Stafford knows full well that issues facing at-risk populations in today’s society. The NFL veteran of a dozen years, all with the Lions, joined with his wife in donating $220,000 this past March to help combat the COVID-19 pandemic in the city.

A former Walter Payton Man of the Year nominee, Stafford is well known for his community work in Detroit. Although, he’s never wanted any real focus on it. That’s altruism in the truest sense of the term.

This has in the past included Christmas giveaways to the poor, donations to first responders and helping at-risk children following budget cuts in Detroit.