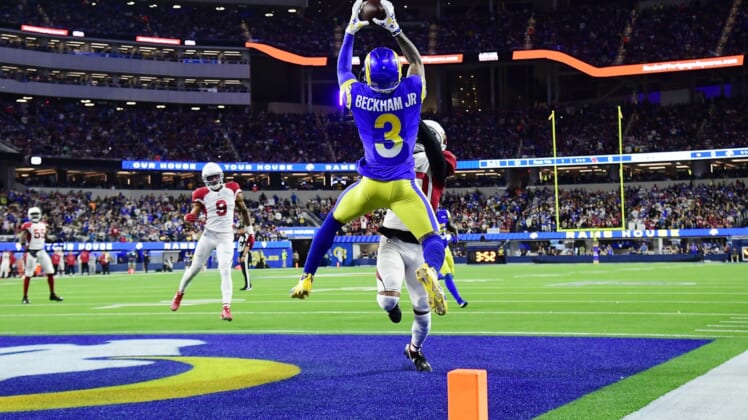 Matthew Stafford rushed for one touchdown and passed for two more as the Los Angeles Rams advanced to the NFC divisional playoff round with a convincing 34-11 victory over the visiting Arizona Cardinals on Monday night in Inglewood, Calif.

Cooper Kupp and Odell Beckham Jr. had touchdown receptions for the Rams, who used a dominating performance from their defense to earn an appearance in the divisional round for the third time in the past four seasons.

Fourth-seeded Los Angeles will hit the road to face the second-seeded Tampa Bay Buccaneers on Sunday, with the winner advancing to the NFC Championship Game.

Quarterback Kyler Murray had just 137 passing yards and two interceptions as the Cardinals lost for the fifth time in their last six games dating back to Week 14, when they took a 30-23 home loss to the Rams.

Arizona had minus-1 net yards near the midway point of the second quarter, following its first five drives of the game, and finished with 183 total yards. Cardinals running backs Chase Edmonds and James Conner combined for just 47 yards on 12 carries.

The Rams took a 7-0 lead with 3:50 remaining in the first quarter when Stafford lobbed a 4-yard TD pass to Beckham in the back, left corner of the end zone. Stafford’s 1-yard quarterback sneak with 11:58 remaining in the second quarter made it a 14-0 advantage.

Things only got worse on offense for the Cardinals when the Rams’ David Long Jr. intercepted a bobbled Murray screen pass and returned it 3 yards for a TD and a 21-0 lead with 7:59 remaining before the half.

The Rams made it 28-0 on Kupp’s 7-yard TD reception early in the third quarter before the Cardinals finally got on the scoreboard. Connor rushed for a 2-yard TD with 4:11 remaining in the third quarter, and Arizona added a two-point conversion to trail 28-8.

The Cardinals lost safety Budda Baker late in the third quarter when he collided helmets with Akers and appeared to be knocked unconscious. He was taken off the field on a stretcher and was evaluated for a concussion at a local hospital. According to the team, Baker never lost feeling or movement in his limbs.

Stafford earned his first playoff victory in four tries after three prior defeats with the Detroit Lions.