How Matthew McConaughey is impacting the Texas Longhorns 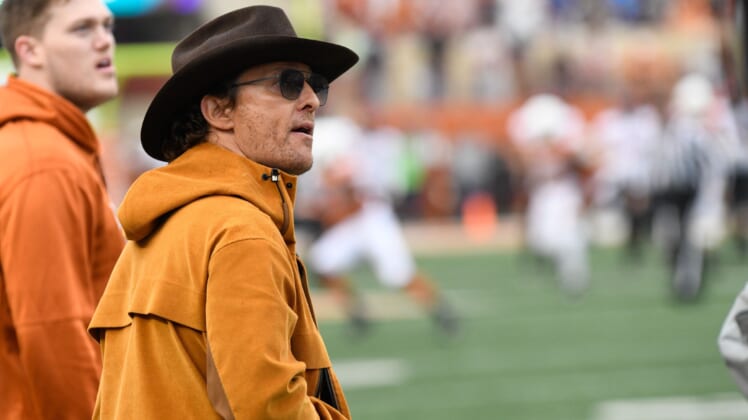 Matthew McConaughey is recognized as one of the most vocal and famed Texas Longhorn supporter, but he was never supposed to rep the orange and white. McConaughey wanted to attend Southern Methodist University, but as revealed in his book Greenlights, financial difficulties led him to the University of Texas.

It is safe to say everything turned out just fine for the award-winning actor. He is a staple in the Longhorn community, and he has turned into the face of the Longhorns.

High-profile celebrities supporting top college programs, especially in football, has become a growing trend in recent years. From LeBron James repping Ohio State, country star Tim McGraw and his love for the LSU Tigers and the cascade of stars backing the USC Trojans.

Yet, for all the big names and their vocal support, none of them match the iconic relationship between Matthew McConaughey and theTexas Longhorns. It’s even more evident on the gridiron, even when Texas is making changes to bring this program back into the national spotlight.

Matthew McConaughey: The Minister of Culture

At the end of 2018, the University of Texas announced a deal to build a $338 million on-campus arena for men and women’s basketball.

Who else would the Longhorns choose to help make the arena one of the greatest in the nation? The one and only Matthew McConaughey.

Very few celebrities have their hands in the works of a brand new multi-million-dollar arena. Even fewer have the title of Minister of Culture.

Star on the screen and in the locker room

McConaughey is known for his acting, but recently, he has become recognized for his speeches. Commercials are not memorable unless they are played during the Super Bowl, however, McConaughey’s Lincoln commercials are infamous.

He has created a brand using his persona to give inspiring speeches. In 2016, before a prime-time game on ABC versus Notre Dame, the Longhorn graduate gave an inspiring speech to his favorite football team.

He uttered three words that echoed all over social media, “Let it rip.” It was a simple message that seemed to resonate with the Longhorns. They went on to pull off the upset, securing a double-overtime victory over the Fighting Irish.

The bond between the Longhorns and McConaughey

It seems every interview with the Oscar winner has questions regarding the University of Texas. The relationship between a school he did not originally want to go to and his brand as an actor seems to be inseparable.

The connection between the two has mutually benefited both sides. If Texas Football is ever back and they win a national championship, there may be no one happier than the Minister of Culture himself.