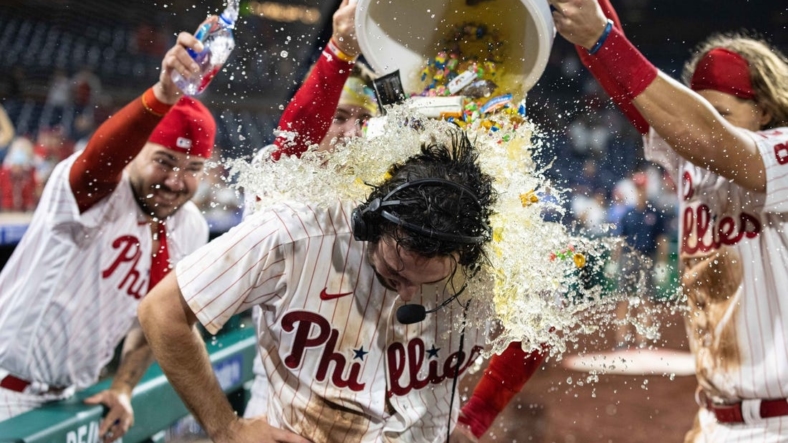 Matt Vierling hit a walk-off single to center field off Adam Cimber with the bases loaded in the 10th inning to rally the host Philadelphia Phillies past the Toronto Blue Jays 4-3 on Wednesday.

It was Vierling’s first career game with five hits.

J.T. Realmuto hit a home run in the eighth for the Phillies (81-67), who snapped a five-game losing streak. Dalton Guthrie and Kyle Schwarber each added an RBI single later in the eighth as Philadelphia rallied from a 3-0 deficit.

Phillies starter Zack Wheeler tossed four shutout innings and allowed two hits with three strikeouts and no walks. Wheeler, who had been out since Aug. 20 with right forearm tendinitis, was on a limited pitch count.

Andrew Bellatti (4-3) earned the win in relief, escaping a bases-loaded jam in the top of the 10th.

Vierling singled to open the bottom of the third inning but was picked off by Gausman.

In the fifth, Jean Segura walked and one out later moved to third on another single by Vierling. Schwarber struck out and Rhys Hoskins walked to load the bases. However, Bryce Harper grounded out to Gausman to end the threat.

George Springer hit a leadoff single for Toronto in the sixth, but Guerrero struck out. Bichette then singled, which sent Springer to third. Yet the rally ended when Kirk grounded into a 6-4-3 double play.

Harper came up with runners on first and third and two outs in the seventh and struck out.

Whit Merrifield singled to begin the eighth and went to third on a fielder’s choice by Springer and an error by Bryson Stott. Guerrero then launched a three-run homer to left for a 3-0 lead. It was the 30th homer for Guerrero and extended his hitting streak to 14 in a row.

Realmuto ripped a solo homer in the eighth to draw the Phillies within 3-1.