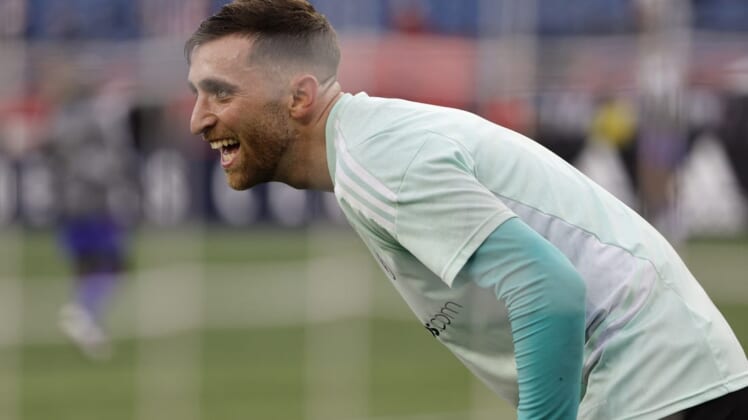 Goaltender Matt Turner will make his farewell start for New England before heading off to play in the Premier League with Arsenal when the Revolution host Minnesota United on Sunday night in Foxborough, Mass.

Turner, who turns 28 next week, is the reigning MLS Goalkeeper of the Year and also played a starring role in helping lead the U.S. Men’s National Team to the 2021 Gold Cup where he was named Goalkeeper of the Tournament.

Turner said he will take a physical on Wednesday in north London to complete a transfer with the Gunners. New England and Arsenal worked out a deal in January that kept Turner in the MLS until June. According to MLSsoccer.com, the transfer will net the Revolution $6 million to start and grows to just under $10 million with incentives.

“I can’t wait for this opportunity,” Turner said. “It’s surreal. This is obviously a big step up from MLS to Premier League. It’s going to be an amazing journey, an amazing step in my story.”

Turner is expected to be Arsenal’s No. 2 behind English national Aaron Ramsdale to begin with. The Gunners, who will take part in the Europa League after a fifth place finish last season, begin Premier League play on Aug. 5 at Crystal Palace.

“The ironic part of the transfer is that Arsenal is his favorite team,” said New England coach and sporting director Bruce Arena, who brought in Serbian international Djorde Petrovic to take over Turner’s spot. “It was clearly something he wanted to do. Arsenal have gotten themselves a very good goalkeeper.”

New England (5-5-5, 20 points) brings in a seven-game MLS unbeaten streak into Sunday’s contest. The Revolution, who will be playing their third game in eight days, come in off a 1-1 draw with Orlando City on Wednesday and haven’t lost since a 3-2 setback at D.C. United on April 23.

The home team has won each of the previous three meetings between the two teams with the Revs taking a 2-1 decision in the most recent contest in 2019.

Minnesota coach Adrian Heath knows the crowd at the Gillette Stadium will be fired up to send Turner out on a high note.

“Well, let’s just hope he doesn’t go out with a bang,” Heath said. “He’s obviously a quality goalkeeper and obviously he’s got a dream move (with) one of the largest clubs in the world in Arsenal, so let’s see how we go, but he’s certainly been a quality player for them.”