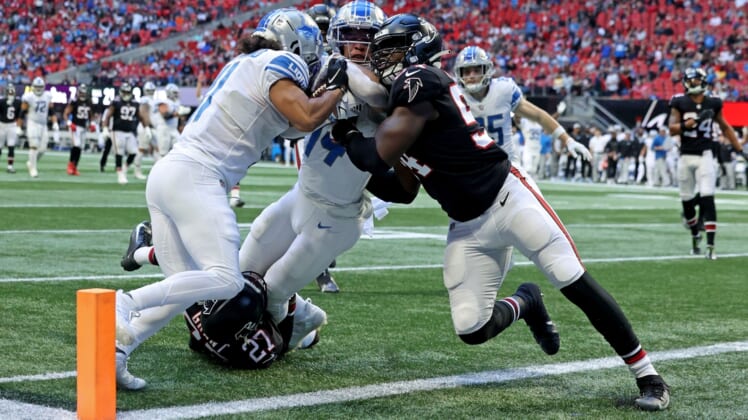 Matt Ryan passed for 215 yards and a touchdown and the host Atlanta Falcons topped the Detroit Lions 20-16 on Sunday.

Cordarrelle Patterson had a rushing touchdown for Atlanta (7-8) and Kyle Pitts caught six passes for 102 yards. Linebacker Foyesade Oluokun clinched the win with an interception in the final minute.

Amon-Ra St. Brown caught nine passes for 91 yards and scored the lone touchdown for the Lions (2-12-1), who had won two of their last three games.

Jared Goff, the Lions’ usual starting quarterback, missed the game after testing positive for COVID-19. Tim Boyle got the start and passed for 187 yards and a touchdown but also threw the costly interception. Jamaal Williams rushed for 77 yards on 19 carries.

The Lions scored first on a 26-yard Riley Patterson field goal. Atlanta had a nine-play, 54-yard drive early in the second quarter, which Patterson capped off with a 6-yard run. The touchdown came on a fourth-and-1 situation.

Detroit answered with an 11-play, 75-yard drive that was extended by a fake punt. KhaDarel Dodge caught a 21-yard pass from punter Jack Fox. That set up Boyle’s 20-yard scoring pass to St. Brown.

The Falcons knotted the game on their next possession with Younghoe Koo’s 53-yard field goal, and the game was tied at 10 apiece at halftime.

Koo’s 48-yard field goal gave Atlanta a 13-10 lead early in the third quarter. Pitts had a 35-yard reception during that drive.

Patterson drilled a 37-yard field goal with 3:06 remaining in the third to tie it once again.

The Falcons grabbed the lead on Ryan’s 12-yard touchdown pass to tight end Hayden Hurst. The 10-play, 71-yard drive was set up by Ryan’s 19-yard pass to Pitts.

Patterson made a 26-yard field goal with 2:38 left to pull Detroit within four points.

Atlanta receiver Russell Gage fumbled the ball away at his own 37 with over two minutes remaining, giving the Lions a chance to win it. But after the Lions drove inside the 10, Oluokun picked off Boyle’s pass attempt with 33 seconds left.