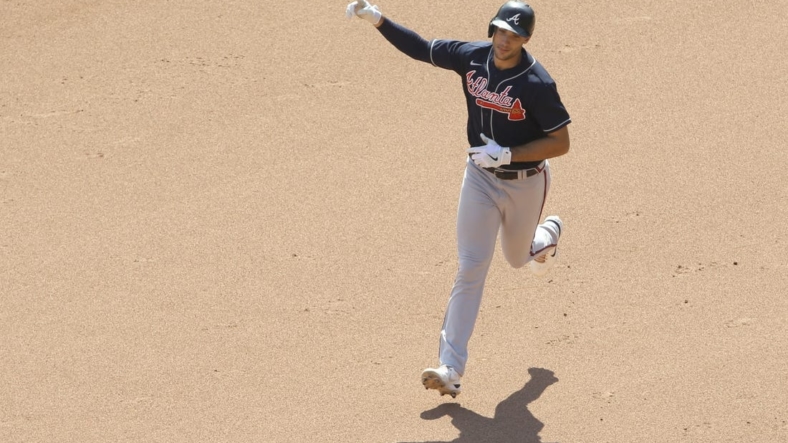 Matt Olson makes his return to Oakland on Tuesday night for the first time since being traded when the Athletics open a two-game interleague series against the Atlanta Braves.

After pacing the A’s or sharing the lead in home runs in each of the past three seasons, Olson was dealt to the Braves in March as part of Oakland’s salary purge that began last offseason and continued up to this year’s trade deadline.

Olson was arguably the most valuable of the exported assets, allowing the A’s to get back two position players who have already reached the majors — catcher Shea Langeliers and outfielder Cristian Pache — as well as two pitching prospects.

Without its star first baseman, Oakland (50-85) has struggled to the worst record in the American League. There have been times when all the new pieces fit into place, like in Sunday’s 5-0 road win over the Baltimore Orioles, when Seth Brown belted two homers and Adrian Martinez (4-3), acquired from the San Diego Padres, threw six shutout innings.

“We’re finally starting to see results from everybody just all being together,” Brown said. “If it’s not (key holdover Sean Murphy), somebody else is going to come up big and it just happened to be me today.”

Langeliers also contributed two RBIs in the win, which ended a 2-4 trip to Washington and Baltimore. The A’s kick off a six-game homestand Tuesday as the Chicago White Sox come to town for four games later in the week.

Interestingly, Langeliers has gotten off to a faster start than Olson when he debuted in September of 2016 at age 22. He has served as Oakland’s designated hitter more often than catching since debuting on Aug. 16 at age 24 and has three homers and 12 RBIs in his first 17 games.

Not that anybody is expecting Langeliers to duplicate Olson’s 2021 career-high marks of 39 homers with 111 RBIs anytime soon.

Olson, a 28-year-old Atlanta native, has 27 homers and 87 RBIs for the Braves with 27 games remaining. He’s done so for a Braves (84-51) team that trails the New York Mets by just one game in the National League East.

Atlanta has won five in a row as it embarks on an eight-game Western swing that includes three in Seattle and three in San Francisco.

“That was a pretty good homestand,” Braves manager Brian Snitker noted of taking two of three from the Colorado Rockies and sweeping three from the Miami Marlins. “We’re down to under 30 (games remaining). We need to keep rolling.”

Wright brings a 15 1/3-inning shutout streak into the contest. He has never pitched in Oakland and was seeing the A’s for the first time in June when he allowed a two-run single to Ramon Laureano in the first inning before pitching shutout ball for the remainder of his eight innings.

Irvin didn’t get a decision after limiting the Braves to two runs in 5 1/3 innings in that one. It was his first career start against Atlanta after five relief appearances.