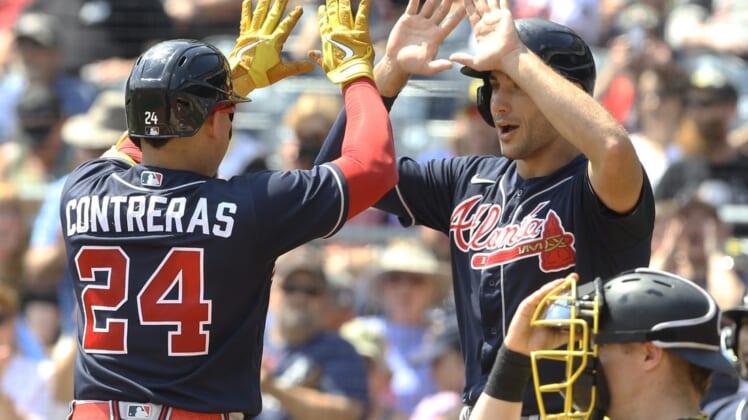 Matt Olson belted a grand slam and Kyle Wright pitched seven scoreless innings as the visiting Atlanta Braves breezed to a 14-2 victory over the Pittsburgh Pirates on Wednesday afternoon.

The Braves won all seven games against Pittsburgh this season.

Wright (16-5) allowed two hits and struck out six batters for the Braves, who have won six of their last seven games.

Kevin Newman belted a solo homer for the Pirates, who have lost five straight.

After Olson led off the second inning with a double, Contreras hit his 17th homer of the season to give the Braves a 2-0 lead.

Eddie Rosario singled to right field with one out in the fourth inning and advanced to second on an infield single by Michael Harris II. The inning looked to be over on a Grossman grounder, but first baseman Josh VanMeter misplayed it for a fielding error.

Acuna Jr. walked to load the bases, and Swanson doubled to right to clear the bases and give Atlanta a 6-0 advantage.

Riley singled to right to drive in Swanson and chase Keller.

Harris walked in the eighth inning, advanced to third on Grossman’s single and scored on Acuna’s RBI single. Swanson’s single to left loaded the bases, and Colin Holderman hit Riley to bring in a run to make it 9-0. Holderman left because of right shoulder discomfort.

Cam Vieaux entered and gave up Olson’s grand slam that bounced into the Allegheny River in right field. The homer was Olson’s 27th homer of the season.

Grossman hit an RBI single to left later in the eighth to make it 14-0.

Newman led off the ninth with his first homer, to left, to end the shutout bid. Tucupita Marcano hit a sacrifice fly RBI later in the inning.