Matt Olson homers in return, Braves hang on against A’s 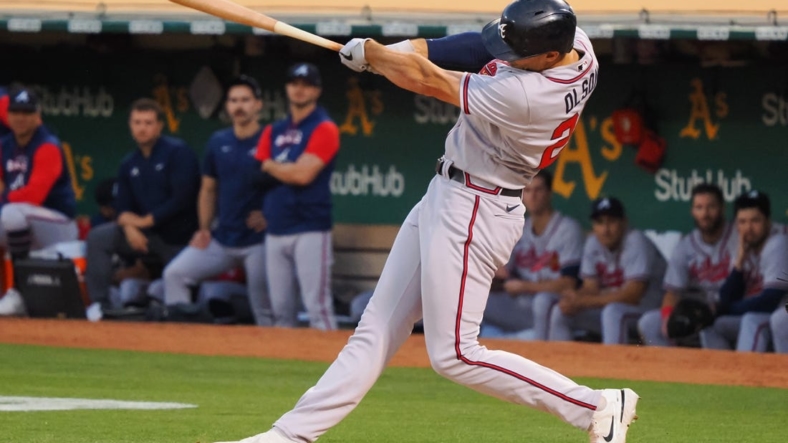 Matt Olson homered in his homecoming and the visiting Atlanta Braves overcame a rare poor effort by right-hander Kyle Wright to outlast the Oakland Athletics 10-9 in the opener of a two-game interleague series Tuesday night.

Playing in Oakland for the first time since getting traded in March, Olson hit a three-run homer in the third and the Braves led almost the whole way after also scoring three times in the first and fifth innings en route to a sixth consecutive victory.

Oakland fell for a fifth time in its last six games despite hitting three homers — back-to-back shots by Sean Murphy and Seth Brown in a four-run third and a three-run blast by pinch hitter Chad Pinder that drew the hosts to a 9-9 tie in the fifth after they had trailed by as many as five runs.

The Braves scored what turned out to be the game-winning run in the sixth off A’s reliever Joel Payamps (3-4) on a Ronald Acuna Jr. double and two fly balls, including a sacrifice fly by Austin Riley.

The Atlanta bullpen dominated from there, with Jesse Chavez (3-1), Raisel Iglesias, A.J. Minter and Kenley Jansen holding the A’s scoreless over the final four innings on just one hit. Jansen worked a 1-2-3 ninth with two strikeouts for his 32nd save.

Oakland starter Cole Irvin was charged with nine runs on nine hits in 4 2/3 innings. He walked four and struck out four.

Olson, who led the A’s in home runs and RBIs last season with 39 and 111, respectively, connected on his three-run blast after Dansby Swanson had opened the third with a double and Riley had walked. The homer was his 28th of the season, raising his RBI total to 90.

Murphy matched Pinder with three RBIs for the A’s. Pinder also had a single in his two at-bats off the bench, while Tony Kemp scored twice.