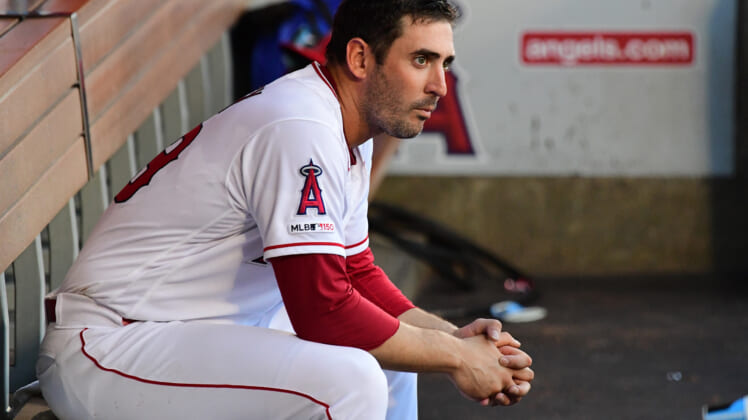 Harvey testified on Tuesday that he provided late Angels pitcher Tyler Skaggs with opioids in the lead up to his tragic death back in July of 2019 at the young age of 27.

Skaggs was found dead in a hotel room in Texas as the Angels prepared for a series against the Rangers. Since then, it’s been confirmed that Skaggs overdosed on a mix of alcohol and the drugs, fentanyl and oxycodone. For his part, the government claims that Kay provided drugs to multiple players — some of whom have testified in court.

Matt Harvey’s admission comes a little while after the defense in the case claimed he had provided Skaggs with illicit drugs prior to the pitcher being found dead.

“If Matt Harvey can find a team willing to sign him, he could immediately be suspended for at least 60 days.”

This comes after Harvey admitted under oath that he had used cocaine before and tried oxycodone that was provided by Skaggs. The former New York Mets All-Star also said that he provided drugs to the late pitcher.

As for MLB, it did release a statement indicating that an investigation will take place once the trial is complete.

“Once the trial is complete, MLB will conduct a comprehensive review of the potential violations of our drug program,” MLB said in a statement to ESPN.

The 32-year-old Harvey pitched for the Angels back in 2019, the same year that Skaggs tragically passed away.

From a broader perspective, this entire trial has painted the Angels’ organization and MLB as a whole in a bad light.

The other players who testified in court this week will not face suspensions from MLB unless they previously violated the policy banning these explicit drugs. Harvey’s suspension would come under the guise of being a distributor. He could also face criminal charges.

As for Major League Baseball, it will not be able to discipline Harvey until the ongoing work stoppage is over. That could come at any time.

Earlier in his career with the Mets, Harvey was seen as the next great young pitcher around MLB. The No. 7 overall pick from North Carolina back in 2010 pitched to a 25-18 record with a 2.53 ERA over the course of his first three seasons.

Since then, he’s fallen off a hill due to injuries and off-field issues. Over the course of his past six seasons, Harvey has posted a 50-66 record with a 4.42 ERA. He put up a 6.27 ERA in 28 starts for the Baltimore Orioles last year.