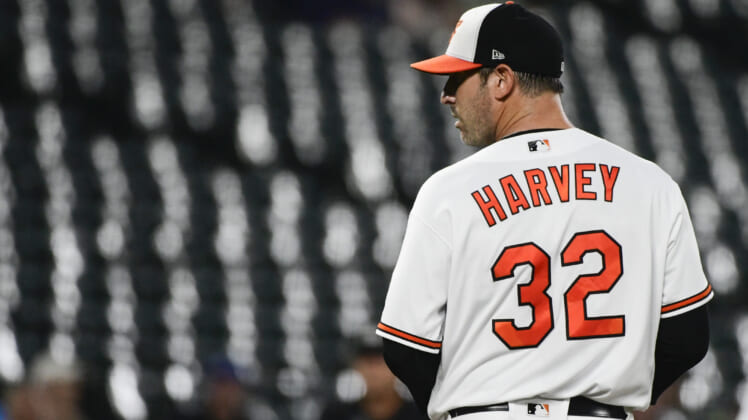 Kay was on trial for his role in providing late former Angels pitcher Tyler Skaggs opioids ahead of his overdose death back in July of 2019.

In said testimony, Harvey admitted that he had also provided Skaggs opioids before his tragic demise at the young age of 27 in a Texas-based hotel.

MLB has now come down on Matt Harvey, handing him a 60-game ban without pay retroactive to April 29.

“MLB announced today that Orioles pitcher Matt Harvey has received a 60-game suspension without pay for participating in the distribution of a prohibited Drug of Abuse. The start date of Harvey’s 60-game suspension is retroactive to April 29.”

Since Skaggs’ death, it’s been confirmed that he overdosed on a mix of alcohol and the drugs, fentanyl and oxycodone.

This comes after shocking testimony from Harvey led to the admission that he had taken drugs provided by Skaggs and also provided illicit drugs to the late pitcher.

“Looking back, I wish I had. In baseball you do everything you can to stay on the field. At the time I felt as a teammate I was just helping him get through whatever he needed to get through.”

Matt Harvey under oath back in February, via ESPN

Harvey, 33, is currently playing under a minor league contract he signed with the Orioles ahead of the 2022 season. He had not seen the hill thus far this season leading up to the suspension.

This is just the latest chapter in a career that has seen Harvey go from the face of the New York Mets earlier last decade to becoming an embattled figure — both on the diamond and off the field.

Since winning 13 games for the Mets back in 2015, Harvey has pitched to a 25-48 record with a 5.92 ERA in 115 appearances (107 starts). He’s split time between the Mets, Cincinnti Reds, Los Angeles Angels, Kansas City Royals and Baltimore Orioles during that span.

It remains to be seen if this latest development pretty much puts an end to Harvey’s playing days.

As for ay, a jury in his trial found the former Angels executive guilty on drug distribution and drug conspiracy charges. He faces a minimum 20-year prison sentence.