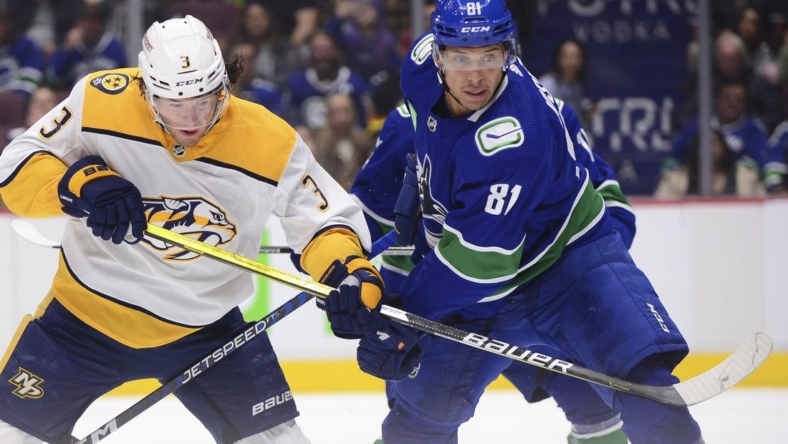 Nashville’s Matt Duchene notched the game-deciding tally in the shootout as the Predators rallied from an early three-goal deficit, beating the host Vancouver Canucks 4-3 Saturday night.

After his team scored twice in the third to tie the match, Duchene potted the one-on-one session’s only goal, firing a hard shot between the pads of Thatcher Demko.

Elias Pettersson missed on Vancouver’s first shot in the shootout, and Predators goalie Juuse Saros stopped J.T. Miller in the second rounds before Bo Horvat lost control of the puck skating on goal and didn’t attempt a shot on the Canucks’ final try.

After allowing three goals in the opening period, Saros settled in and eventually stopped 42 shots.

Miller and Ilya Mikheyev netted at even strength for a 2-0 Canucks lead, and Andrei Kuzmenko scored on the power play. Quinn Hughes posted two assists.

Horvat assisted on Miller’s marker, giving the Vancouver captain 200 helpers for his career. Demko made 27 saves.

Less than two minutes into the teams’ first meeting, Vancouver’s offense — which scored eight goals against Anaheim on Thursday — picked right up where it left off.

Mikheyev scored his third goal from the left circle at 1:56. Then Horvat stole the puck from Gross on a forecheck, and Miller tallied for the seventh time on a rebound at 3:41 for a 2-0 lead.

The Canucks held a 10-0 shot advantage through 11:40 before Duchene finally put one on Demko. The home club ended with a 13-3 edge in shots after the first period.

With Vancouver’s red-hot power play on the ice late in the period, Miller sent a hard pass into the low slot that Kuzmenko chipped in for his seventh goal at 17:32 to make it 3-0.

Three minutes into the second, Gross slipped through the slot and tipped in Niederreiter’s shot for his first career goal while the Predators were on the power play.

Just 66 seconds into the final frame, Gross delivered a long shot from near the blue line that found its way in. Then Niederreiter put in his own rebound to even the game at 3 at 2:41.